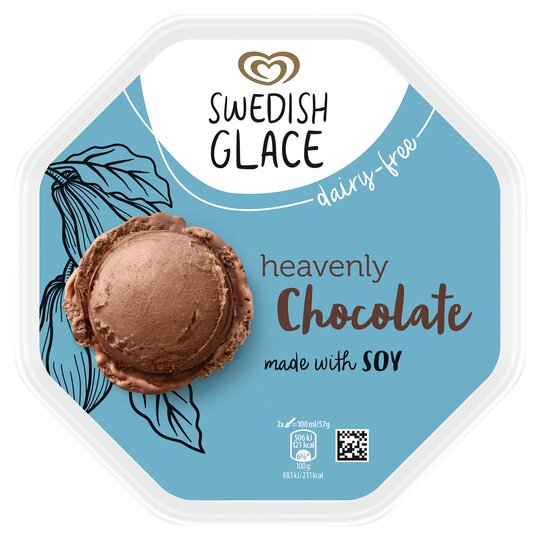 I don't usually write reviews but I felt I had to

I don't usually write reviews but I felt I had to for this icecream. I think it is amazing, considering it is vegan icecream. The vanilla flavoured one they do is lovely too. Well done for making such a yummy treat 🙂

Really nice, as is the raspberry version. Give the chocolate one a miss, though!

Tastes like playdoh. I’m not one to waste food but

Tastes like playdoh. I’m not one to waste food but this one ended up down the sink. Will stick to vanilla from now on.

Creamy & not too sweet

When I first tried this I was worried it was going to be so sickly sweet it would make my teeth ache just thinking about it. Thankfully it wasn't and I really enjoy it. I actually like all three flavours but sadly Tesco don't sell the raspberry which is my favourite however this comes a close second.

We love the Vanilla Swedish Glace, it’s the best dairy free ice cream you can get, even better than many dairy ice creams. This flavour retains the wonderful creamy texture but it tastes horrid, like an old shoe. Just get Vanilla instead.

Actually so nice 😍 only soya ice cream I will eat

Actually so nice 😍 only soya ice cream I will eat, sorbert only other wise.

Swedish Glace vanilla is the best ice cream, I've ever eaten, including ones containing dairy. This has very little chocolate flavour, it tastes almost watery. It's not terrible but it's not good. Don't recommend.

I couldn't taste the chocolate , contains only 1

I couldn't taste the chocolate , contains only 1 percent chocolate powder! The vanilla is so good in comparison , I will not be buying the brown stuff again .

Buy the vanilla flavor instead!

It just tastes like any other soy-based ice cream, not much flavor. However the vanilla flavor...my non-vegan housemate 100% loves!