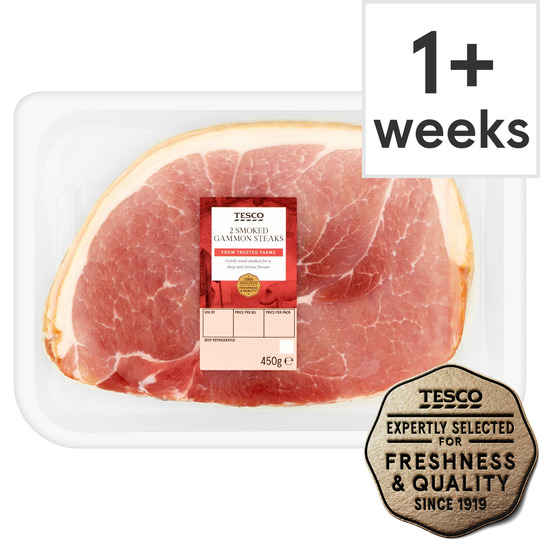 Suitable for home freezing. Ideally freeze as soon as possible after purchase but always by 'use by' date shown. Defrost thoroughly for a minimum of 8 hours in a refrigerator. Once defrosted use on the same day and do not refreeze. Follow the preparation guidelines above. Not suitable for cooking from frozen Keep refrigerated. Once opened, consume within 24 hours and always by Use By date shown.

Grill
Instructions: Place steaks under a pre-heated medium grill for 10-12 minutes, turning once. Remove from grill and rest on a warm plate for 5 minutes.

Shallow Fry
Instructions: For best results, pan fry. Heat a dry frying pan until hot and cook steaks for 1 minute each side, reduce to medium heat and cook for 3-4 minutes each side. Remove from pan and rest on a warm plate for 5 minutes.

Made using British and EU pork.

These used to be very nice! Last two purchases were too salty very tough and basically inedible! I left it a few months after last purchase thinking it may have been a bad batch but unfortunately no they are just bad.

Very poor quality, lot of fat and the meaty bits un chewable on the last three orders of this. Have now removed it from the shopping list.

These were disgusting, chewy, fatty & gristley, the water was still oozing out after being fully cooked, had placed one in the freezer but after attempting to eat one they are both now in the bin!

So salty we couldn’t eat it!

Too thin, would have been better to leave it as on

Too thin, would have been better to leave it as one slice imo. Otherwise OK.

Very tender and not salty. Roasted in oven - quick

Very tender and not salty. Roasted in oven - quick and easy. Good product and no waste.

not the quality you would expect from tesco

this product was extremely grisly and fatty. had to bin it.

Worst Bacon I've Ever Had

A prime example of why Tesco don't publish customer reviews. One of these produced about 50 ml of fluid along with a load of disgusting white muck. Having drained the pan 3 times, and cooking as per intructions it became a tasteless lump of inedible cardboard.