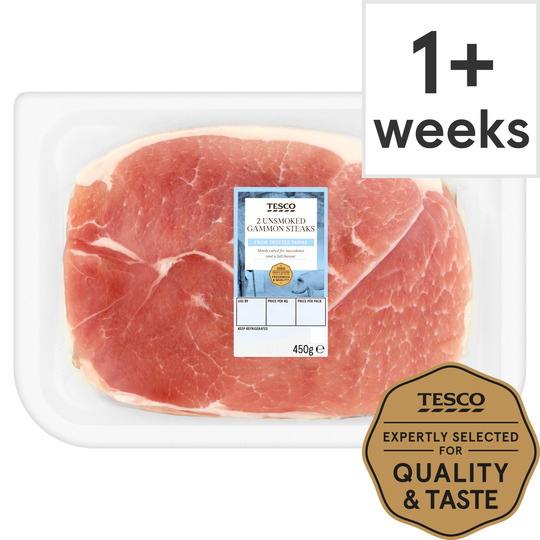 22%of the reference intake
Saturates
5.9g

30%of the reference intake
Sugars
0.2g

94%of the reference intake

Suitable for home freezing. Ideally freeze as soon as possible after purchase but always by 'use by' date shown. Defrost thoroughly for a minimum of 8 hours in a refrigerator. Once defrosted use on the same day and do not refreeze. Follow the preparation guidelines above. Not suitable for cooking from frozen Keep refrigerated. Once opened, consume within 24 hours and always by 'use by' date shown.

Grill
Instructions: Place steaks under a pre-heated medium grill for 10-12 minutes, turning once. Remove from grill and rest on a warm plate for 5 minutes.

Shallow Fry
Instructions: For best results, pan fry. Heat a dry frying pan until hot and cook steaks for 1 minute each side, reduce to medium heat and cook for 3-4 minutes each side. Remove from pan and rest on a warm plate for 5 minutes.

Very disappointing - tough, salty, fatty, very wet (13% water). What I found very annoying was the piece on top looked ok but when you opened it up the piece below had much more skin and fat and was frankly awful. SUPPLIERS SHOULD BE BANNED FROM PRACTICES LIKE THIS. SORT IT OUT TESCO

The pack I received last week was very creatively packed, it looked nice and lean but when I turned the steak over it was all fatty on the back. Very disappointed in the quality :-(

This Gammon is meant to unsmoked, so follow my instructions and cook this way, remove from packages place direct in water and boil them for at least 3 quarters of an hour depending on thickness of steaks. To test if cooked remove one from water test by a sharp knife in middle if it goes in easily its cooked. Plus boiling it will be able to tip water away to remove the saltyness. Its really delicious this way. I also cook gammon joints the same way. What is a great thing to remember is your tipping away and replacing fresh water in saucepan. continue to cook till tender

These gammon steaks were like old boots. I always grill them and have had better ones. I don't know if Tesco has changed their supplier but these last ones were very poor and tough

Too salty to eat

I put these in a dry pan as per instructions. Loads of salty water came out, I had to clean the pan before I put the gammon back in. When cooked the steaks were much too salty to eat. Ruined meals.

Usually great steaks. Had a pack today in my delivery and one steak was half thick white fat. Very disappointed

Not had a bad one before, hopefully just a one-off

Not had a bad one until now so hopefully just a one off. Strange as each gammon was thin on one half and very fat on the other which made them difficult to cook. O.H. thought his was ok but I couldn't eat mine, it went in the bin.

Nice if you have a health-grill

Had these a while back and pan-fried them.They were fairly nasty.However,i was given an Opti-Grill and have cooked them a few times on that at max heat and it's a game-changer.Really nice flavour,tender and no white goo! (They can't curl either)

This is sold as 2 steaks, but only one of the steaks was a whole cut; the other steak was in five completely separate pieces, (which was only apparent when the pack was opened).