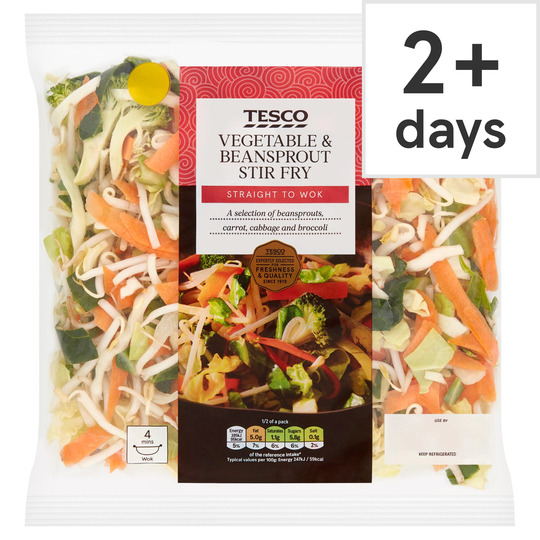 Keep refrigerated. Once opened, consume within 24 hours days and by 'use by' date shown. Not suitable for home freezing.

Warning: Do not eat raw beansprouts..

I have been buying this for a while and for the price it has always been OK. The last couple of times though it has been truly awful. Huge lumps of inedible cabbage stalks and really ENORMOUS pieces of broccoli which have to be chopped up before you can possibly stir fry them and which last time contained a slug. Really disappointing and I will not be buying this again.

Perfectly acceptable, there are a few bits of cabbage that are cut a bit too thick but they're easy to pick out when you're cooking it, besides that it goes well with the noodles and sauce. I fly it for about ~10 minutes on a high flame so everything is mostly tender, but some vegetables will still have a little bite.

I find these mixes to be bland and do not add a great deal of flavour to a stir-fry.

Bought the deal. It wasn't too bad but the veg was very crunchy and cabbage stems included. Not liked. Mixed together with a sauce it was overall not too bad. But too much in packets to last. Had to throw left over amount away.

The meal deal of this is good value for money and

The meal deal of this is good value for money and this product wasn't too bad, however, it's quite a big pack and doesn't keep for long so ensure a family can eat this within the first day of two after purchasing.

Not very nice at all. I wondered if they had been to the pet section to get this, but it would have been fresher from there! Consists of mostly bean shoots, peelings, and all the cr*ppy bits you cut off when you’re preparing vegetables and not even fresh even though it was well within the sell by date.. Grr! It should be checked by Tesco to see if it is actually fit for human consumption...

This was almost all cabbage! Only a few beansprouts, 5 tiny pieces of broccoli and a few slivers of carrot. Very disappointed.

Tasty but a little crunchy

It was really tasty, chose a bit of a rubbish sauce (but that was my fault, nothing wrong with the veggies). Only thing stopping it from being 5 stars is that the broccoli was a little bit crunchy but actually made a nice texture!

Goodness me, Tesco. That was horrible. Very little tasty veg and mostly chopped up cabbage stalks. The cabbage stalks would have cooked if you'd fast boiled them for 5 minutes, but no way were they going to cook in a stir fry. This was an attempt to get veg-hating teen to eat veg under the cover of noodles and Chinese sauce. (Usually works.) Even I had to leave most of it. And I love my veg in all its glorious forms.

I got this as a substitution as my product wasn't in stock. Lots of bean sprouts but majority still had their stringy roots attached. Disappointed and meal wasn't as enjoyable as it should have been.