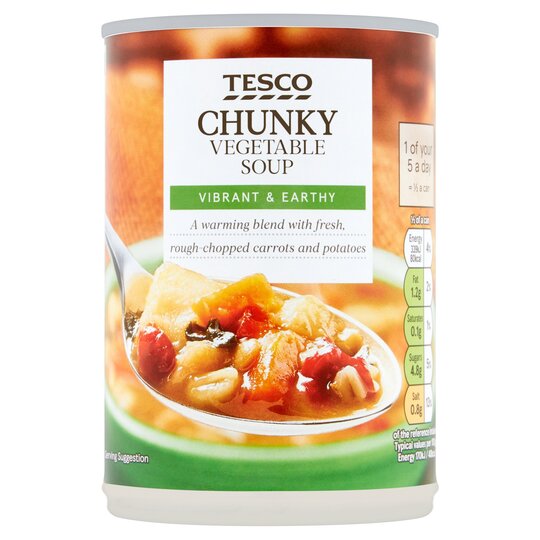 Store in a cool, dry place. Once opened transfer unused contents into a non-metallic container, cover and refrigerate. Consume within 2 days.

Hob
Instructions: Empty contents into a saucepan.
Heat gently for 3-4 minutes, stirring frequently.
Do not allow to boil.
Time: 3-4 minutes

Really nice thick and wholesome soup that warms you on a cold day! A good mix of vegetables and a nice amount of seasoning makes this more of a meal than a snack - I ate the whole can, even though it says there are two servings, and accompanied it with a thick cut crusty bread slice and butter. I added a little salt to mine for additional flavour enhancement. Considering I imported a couple of cases over to Canada, I am happy that my gamble paid off. Will have to bring more over!

Pearl barley - yuk! This soup had more pearl barley than any other vegetable, it was insipid and tasteless. As for red capsicum - double yuk!

Very bland had to add quite a bit of salt and pepper to make it palattable.

(NB tins labeled as 'Chunky Vegetable Soup', as in the picture: not '...Winter Vegetable...') We were excited to try this soup and bought several tins. It turned out the flavour was not to our taste BUT the real problem was that every single tin contained coarse fibrous chunks of one of the vegetables – presumably either swede or parsnip? – that can only be described as WOODY and were inedible.

My all time favourite soup - so warming and filling and with such a delightful variety of veg! I could eat this every day (and often do...)

I would not buy it again.

The soup tasted odd and I didn’t want to eat it. The ‘meat’ was an odd texture, full of gristle and fat. I didn’t have anything else to eat for my dinner but I still threw it out rather then eat it. Unpleasant and poor quality ‘beef’.

I love Tesco's winter vegetable soup, it's good value and tasty, also nice and warming on a chilly day.

I tried this for the first time, and may i say the

I tried this for the first time, and may i say the last. It is totally tasteless, and dish water springs to mind.There is no stock to speak of and a few mushy vegetables thrown in.I have tried most of Tesco's soups and the all have this running theme. I think they should go back to the drawing board. I honestly don't know who passes the quality inspection.