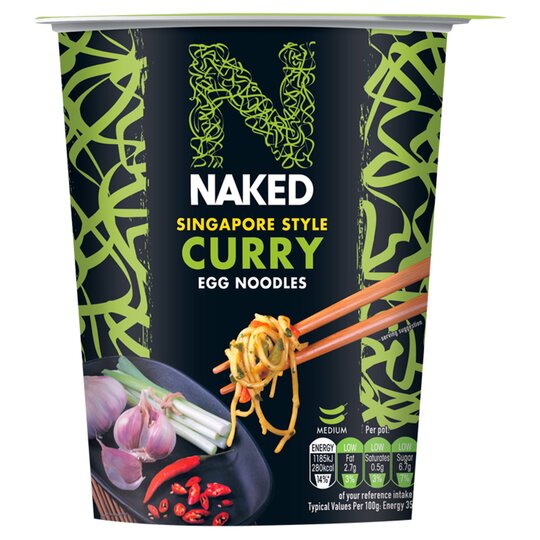 Store in a cool, dry placeBest Before End: See base of pot

WARNING: When prepared as per instructions the pot and contents will be hot. See preparation guidelines for details

This was the first time I ever tried this Naked brand, and I don't know if it's just this flavour or if they are all like this, but these were seriously gross. I'm no stranger to potted noodles of all types, so this isn't a snob thing, but there's something really nasty about these. The noodles themselves are grainy yet slimy, and the sauce is gloopy and somehow manages to be simultaneously cloying and tasteless. And there are these weird slimy white dots floating on the surface. And it smells rank. I couldn't even eat them, they went into the bin after a few spoonfuls. And an hour later I can still smell them stinking out the kitchen, gonna have to empty the bin. Avoid!

This was so bland

They have some great flavours but this one is horrible. Still ate it because the noodles themselves are nice. Just choose another flavour.

Tasteless, had to add stuff to get it to taste of

Tasteless, had to add stuff to get it to taste of anything. Stick to pot noodle miles better.

So bad it is unbelievable

Rarely leave reviews but this is so bad I must warn others. Hardly any flavour and I wonder how a marketing department could allow this product to be launced

Ignore the others who said it was good, terrible!

Ignore the others who said it was good, terrible! Hardly any noodles and so bland, has no sauce packet or anything so it’s tasteless. AVOID! Worst noodles I think I’ve ever had.

These were absolutely revolting! They left an awful aftertaste. Won't be trying again!

The pot was flimsy, not much content in the pot wi

The pot was flimsy, not much content in the pot with the taste being watery and what I like to refer to as "spicy bland". So a lack of depth in the taste of spice wasn't a nice taste either. Would avoid at all costs.