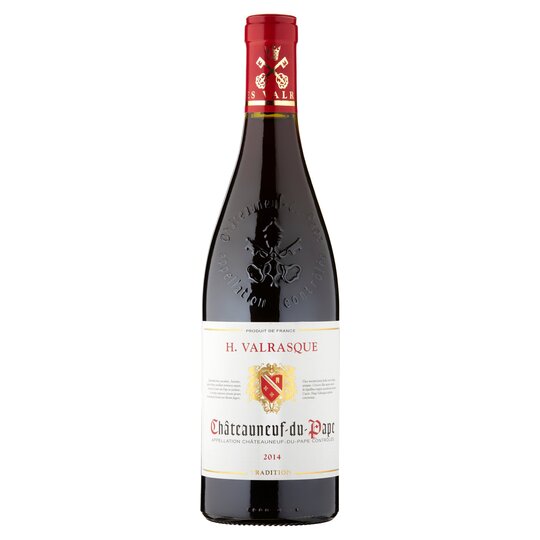 My husband is french and was given a bottle of this as a thankyou gift. He said it was excellent and wouldnt let me use any in my cooking.

Avoid. Many better CNdP’s out there

No body. Thin and lacking in any complexity

The other reviews are a bit harsh

My mum bought us a bottle of this (2014 vintage) and after reading all the reviews on here I was prepared for the worst, but it was actually an enjoyable, balanced, full-bodied red! Now I'm no Chateauneuf Du Pape connoisseur - but nor, I suspect, are most people who buy their wine from Tesco... So if, like me, you are an enthusiastic consumer of wine, but couldn't tell a blackberry back-note from an autumnal aroma, it's worth a punt.

Disagree with other reviews, if same vintage.

I bought a few bottles of the 2014 at £8 a bottle and found it good value. We have drunk two bottles from 6 and found them both fruity and full bodied. We did ensure that it was at room temperature and left to breathe for about an hour. Anything cooler and it did taste sour. Definitely buy again, but at £8 or less, not the full advertised price.

Not fit for human consumption

I had to register for your site and a tesco clubcard, just to tell you how bad this wine was. Thin and sour, most of the bottle has gone down the drain, despite my best efforts to persuade myself it might just about be drinkable. Tesco has let itself down by putting such a poor product on its shelf. I am tempted to return the bottle for a refund, but I think instead I will just learn my lesson and by my wine elsewhere in future.

I wouldn't go as far as describing it as the Chatenheuf-du-Crepe which seems to be implied by some of the other reviews but I did find it extremely disappointing: harsh, virtually no nose and bears no resemblance to other wines from this region that I have experienced (a limited experience, I admit). I would much sooner spend far less money on some other decent full-bodied reds from the Tesco range.

Thin and sour with a short bitter finish. The worst Chateauneuf I have ever tasted. The Tesco Finest Chateauneuf may be £5 more expensive but it's worth every penny as it's a very decent example of the appellation. This effort by H.Valrasque however is a travesty of the brand.

Shockingly bad - my girlfriend just bought a bottle thinking she getting a bargain - at £8 - even at £2 it would seem expensive.

How could this be released as a Chateauneuf du Pape?