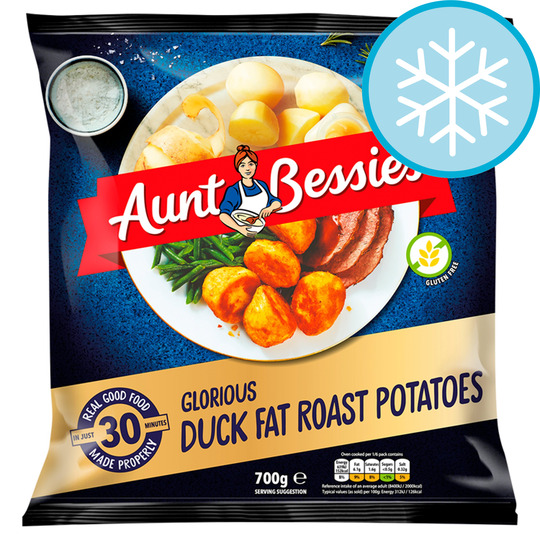 of the reference intake*
Typical values per 100g: Energy 312kJ/126kcal

Store in a freezer at -18°C or colder.Do not refreeze once defrosted.

Oven cook
Instructions: Conventional Oven: Preheat oven to 230°C/450°F/Gas Mark 8 30 Mins
Fan Assisted Oven: Preheat oven to 210°C/410°F 30 Mins
Once defrosted do not refreeze. All cooking appliances vary, the following is a guideline. Take Care - product will be Hot.
Remove all packaging. Spread the Duck Fat Roasties evenly onto a non-stick baking tray with upturned edges. Place the tray in the centre of a preheated oven and Cook for 30 Minutes until crisp and golden.
Turn the Duck Fat Roasties at least once during cooking to ensure an even crispness. Ensure the Roasties are piping hot before serving.
Serve immediately.
Not Suitable for Microwave Cooking.
For fan assited and miniature ovens, refer to manufacturer's handbook for guidelines.

They do not look like roast potatoes, they look processed because of their shape, but I find them absolutely delicious and very easy to pop in the oven, so I am buying them again and they will probably remain on my shopping list. I did not even turn them, but I do have a fabulous cooker. This is good food, in my opinion and I am very careful with what I eat. They are a good compliment (along with garlic bread) to many dishes including pasta dishes laden with herbs, actually. I probably would not eat a lot of them in one sitting, just one, two or three, depending. A really, really, nice product, especially for we singletons. They were lying in my freezer for ages before I opened them. Had I known how nice they were, they would have been opened sooner, for sure. Just, great. Thanks :)

Awful - Even The Foxes Wouldn't Eat Them!

Terrible - the worst frozen roast potatoes ever. Everything about them is dreadful. Threw them outside for the local foxes and even they refused to eat them! Very expensive as well. Absolutely dreadful, do not bother.

I got these in case I ran out of potatoes during lock down. They are really good compared to others I've tried. The have a nice flavour and stay crisp. The family were impressed.

We really enjoyed these, thought they were better than the other original pack (not gluten free). The potatoes are bigger and they are fluffy inside. They crisp nicely too and don't feel they are greasy. Will buy again for sure, might even use them for Christmas rather than doing my own!

Quality very poor, very dry, not crispy. Not worth buying.

I like these Duck Fat ones better than the normal

I like these Duck Fat ones better than the normal ones, but did have in one packet a couple whole potatoes that couldnt use. But it is not all the time. Will still buy.

Like these, always have them. Better than the regular ones

Aunt Bessie's Special Roast Potatoes are the best!! I have never tasted roast potatoes as tasty as these. A bit more expensive than the others but so worth it.

Glad shes not my aunt

Terrible had a piece looking like a tumour in the the bag stunk took it back after xmas.had a letter from aunt bessies giving me a £6 pound voucher rather would have nothing than that insult.

Bought as a new product, having liked Aunt Bessie's frozen roasts as a convenient alternative in the past. These were dry, tasteless and no evidence of the duck fat! They took considerably longer (about 15 mins) than the stated cooking time to be cooked through. Won't buy again