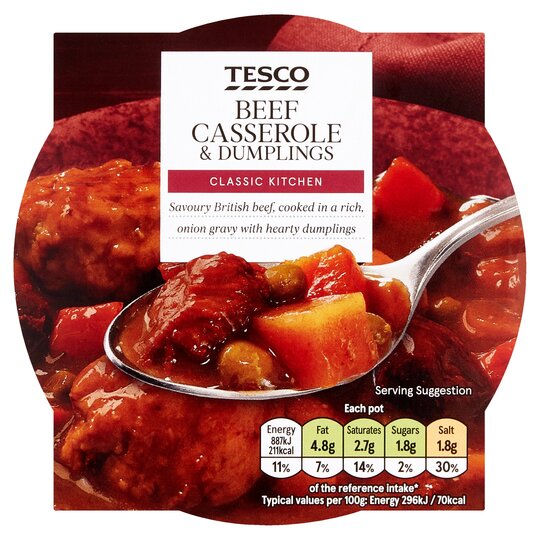 Store in a cool, dry place. Once opened, use immediately.

Made using British and Irish beef

Not one piece of meat in this meal.All gravy and a few root vegs.Horrible.

Disgusting tasteless rubbish meal, not recommended. You can do a lot better than this Tesco!!

I thought this was really horrible. I shall not be buying again!

Not as bad as the reviews suggest!

I think these are fine, and - if you're dieting - a bit of a treat. I mean, dumplings when the whole thing is only 211kcal? The downsides: it's largely gravy and spuds - you don't get much meat - but it's a substantial plateful if you serve it with extra veg.

It was awful in the sense that there was only one small peice of meet in it, and the dumplings were small and stodgy.

Had a very small amount of meat and veg in it, admittedly the meat was tender (the only positive thing about this meal), but the amount of gravy compared to meat and veg is way too much - it was more like a soup than a casserole. Now I don't expect these type of meals to be low in salt, but honestly I could smell the salt before even tasting it. The 2 very small dumplings were stodgy and soaked in gravy. It also left a horrid aftertaste in my mouth. To look at it once it's dished up, you'd think there was enough to fill up for lunch (which is what I bought it for), but the lack of meat/veg/dumplings meant I needed 2 slices of bread to fill me up and soak up the rest of the rather foul gravy.

Foul muck. One star for the useful container. Yuc

Foul muck. One star for the useful container. Yuck.

We have bought this product several times, as it is a quick and easy meal to do if short of time. I usually keep a couple in the freezer. The one we had last time wasn't up to the usual standard, but the one we had tonight was awful! The dumplings disintegrated in cooking and the whole meal was a glutinous mess. The meat was tender, but there was far too much gravy and not enough meat and carrots. I don't think I will buy this product again. Very disappointed!

Meant to buy the Tesco Beef Casserole And Dumpling

Meant to buy the Tesco Beef Casserole And Dumplings 450G but ordered this instead - agree with other reviewers, 2 "dumplings" (and I use the word reservedly) 2 lumps which could be carrots - or maybe turnip, 2 lumps of turnip (see previous) and 3, yes 3, teeny weeny bits which I suppose were meat but couldn't tell, and half a gallon of "gravy?". Avoid if you like food!