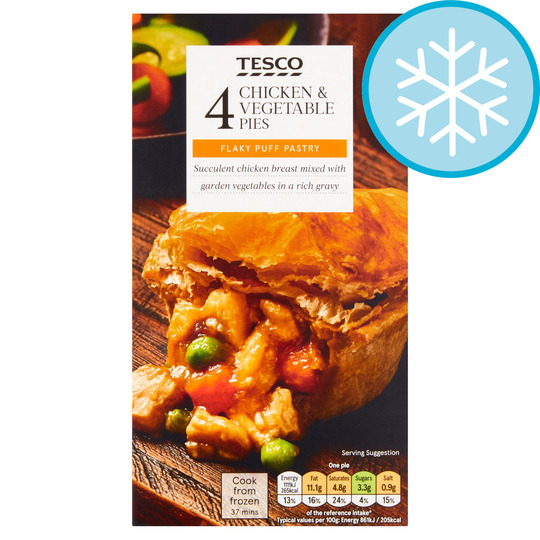 Instructions: 200°C/Fan 200°C/Gas 6 30-35 mins Place on a baking tray in the centre of a pre-heated oven or until golden brown. Leave to stand for 2 minutes before serving.

Made using chicken from Thailand.

Should be called vegetable & find the chicken pie

We have had these before and enjoyed them but very disappointed this time, there was only 2 x 1cm cubes of chicken in the pies definately more veg than chicken but the gravy was tasty.

Most tasteless chicken pie i've ever had. Usually buy the Birds Eye chicken pie but thought i'd give ur cheaper own made one a go. Was smaller than Birds Eye wasn't a massive deal, ticked all the boxes looks & smell wise but had no flavour or taste at all. Ended up just binning it!!

Just okay. Nothing really wrong, but not great. Small and barely enough filling.

Have you ever been let down by a pie?

Well, where do I start. What at first appeared to be a humble pie that’d satisfy me and the wife for our evening meal ended up being nothing more than a sad couple of chunks of disappointment wrapped in a carcass of wilted pastry. Let me be clear, I’m not usually one to moan but nothing has ever made me feel the way this pie has. Have you ever felt heartbreak? Have you ever felt disappointment and despondency like I have? Didn’t think so. Initially I was struck with an immense sense of confusion; where oh where have the contents of my pie gotten off to? Maybe they come separate in a bag and I am to manually add the filling myself? Alas, this was not the case. Upon closer inspection I discovered that the pie wasn’t totally empty. There it was, tucked as far back into the abyss that was my hollow pie as possible, an isolated miniature slab of chicken. It was so lonely hidden in that desolate bed of pastry. Not a carrot or pea in sight (probably lucky as I am allergic to greens!). Me and the wife sat back and reflected for a while; maybe it was us. Maybe it’s our fault for expecting the pie to be at least half full of that beautiful and traditional filling we so crave. Perhaps this is the new norm? Should I teach myself to expect less? Should I lower my standards? I’m not so sure myself. I do plan to buy another of these pies again in the future; I feel as if there is clearly great room for improvement and, as Tesco is a big enough establishment, I figured a measly pie would be a piece of cake for them to fix. My overview: If you want a pie because you’re a big fan of pastry and gravy, this is the pie for you. If you want a pie because you’re in search of the perfect medley of meat, vegetables, gravy and pastry, boy have you come to the wrong place. It’d be a pity to see anyone else be so bitterly disappointed by such a pie as this, so I would strongly recommend going to Sainsbury’s (soz Tesco!) as their pies are bad, but nowhere near as pitiful as this. 2/5, not a fan

Very disappointed with these pies. Tesco would probably not get much trouble from Trading Standards if they emblazoned "suitable for vegetarians" across the box. But then of course, they might have to put more than two peas and one tiny piece of carrot in. My wife and I had one each and the two remaining in the box will go to the dog who will probably be looking for the meat as well.

Don't waste your money on these!

Dreadful, to start with they were welded to the tin foil and had to be scraped out leaving tasteless pastry and a thin white gravy. No evidence of anything resembling vegetables and a few tiny chunks of cardboard chicken nothing like the wholesome pic on the box!

Normally quite nice except for very hard pastry on

Normally quite nice except for very hard pastry on top and quite soggy at the bottom of the pie. Have eaten one pie from the last box I bought and the carrots were crunchy despite the rest of the pie being piping hot and thoroughly cooked.

These pies are awful, tough pastry, no veg, hardly any chicken, glassy gravy and absolutely no taste at all, nothing... like eating warm wet cardboard. Very disappointed

A waste of a pie

Was given this as a substitute for the Birds Eye chicken pies, and such a disappointment. They were that small there was hardly any filling, and most of that was vegetables instead of chicken. A complete waste of money.