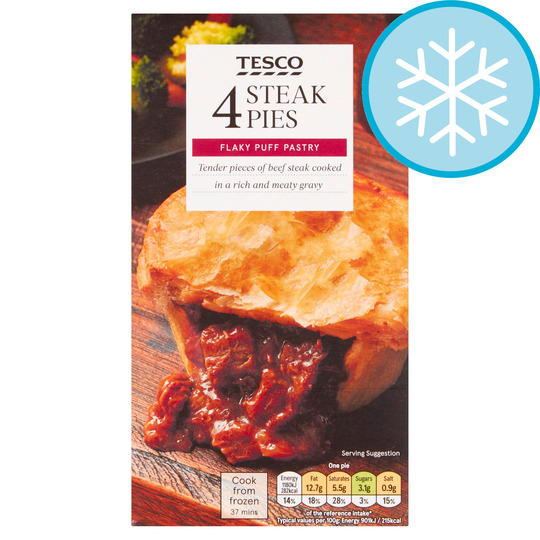 Instructions: Oven from frozen: 200°C/Fan 200°C/Gas 6 30-35 mins Place the pie in its foil on a baking tray in the centre of a pre-heated oven for 30-35 minutes or until pastry is golden brown. Allow to stand for 2 minutes before serving.

Made using beef from the U.K. or Ireland.

Never found lumps of steak only grizzly bits and l

I bought these, not expecting much. HOW WRONG CAN YOU BE! 4 lovely little deep filled pies, full of tender meat and tasty gravey.

There was not one piece of meat! Pastry reasonable; 'gravy' good but NO meat!

Very poor quality pies,think they should be called mystery steak pies,as the mystery is finding any steak in the pies,more like a gravy boat pie.

Each of these rather small pies burst open in the oven, producing a slick of burnt-on gravy on the tray, while the tops of two somehow remained pale. To compensate I made some gravy - and after having the first hard, dry mouthful went and made some more as they would clearly need a lot of sauce to get them down. In the end the dog got more pie than we did. Hard, flavourless crusts encased a tiny bit of meat. I managed to fish one chunk about 1.5cm x 3/4cm out of mine, no one else could find anything other than odd shreds in what remained of their gravy. They're a deep shape, but the actual contents were very lacking, both in flavour and quantity. To be fair, if any of the family size pies Tesco normally stocks had been available I would have bought one of those to avoid so much pastry, but there was nothing else to be had with a shortcrust outer. Unfortunately instead of crumbly shortcrust this was made with too much water and was rigid when cooked. If there had been more filling or more of the moisture had stayed in the pie it might have soaked into the pastry a little, and made it slightly more edible.

The most tasteless pie ever. Everything tasted watery, the filling even the pastry. Simply awful.

Just okay. Nothing really wrong, but not great. Small and barely enough filling.

The pies have shrunk and literally full of air, a couple of tbsps of white sauce and two teensy bits of meat - Not worth buying - only for children