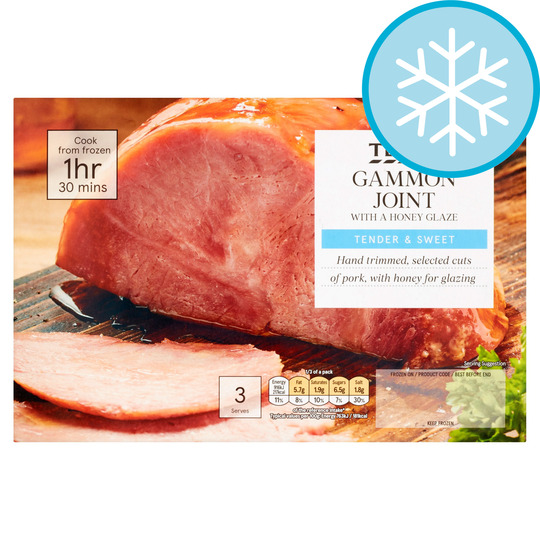 Instructions: For best results cook from frozen. 200°C/Fan 180°C/Gas 6 1hr 20mins Cover the tray with tin foil and place in the centre of a pre-heated oven for 1 hour 10 minutes. Remove from the oven and carefully remove the foil. Pour off the meat juices. Open the sachet of sauce and pour evenly on top of joint. Place back in the oven for a further 10 minutes. Allow to stand for 5-10 minutes after cooking.

Made using British and EU Pork

Sorry guys not impressed, bland , not value for money and too much packaging for such a small joint, and I mean SMALL

Not great at all tasted of nothing and cooked for

Thought we had ordered the chilled version - got this, didn't spot it until the driver had gone. Lumps of something nameless pushed together in a mould, bore no relation to gammon OR the illustration, dry, with an odd smell and taste, couldn't eat it.

The meat was devoid of flavour and the honey 'sauce' tasted nothing like honey. I tried it hot with new potatoes and veg; not a particularly enjoyable experience. I tried it cold with salad, equally as bad. The rest (most of it) went in the bin.

If you want a quick way to make honey glazed gammon please do no buy this. The joint is small and generally unpleasant to look at and eat. Honey glazed gammon can be easily made with separate ingredients. I was obviously feeling particularly lazy when I ordered this. Will not be buying again!

The picture on the label did not resemble what cam

The picture on the label did not resemble what came out of the packet. There were chunks of fat which had to be thrown away, the meat itself was not tender and it did not serve 3 people. I do not recommend it and will never buy it again.

We've had this a few times and found them to be tasty, moist and tender with a lovely sweet honey glaze. Seems to have had a lot of bad reviews so I might have just been lucky but we'll keep buying until we get a bad 'un.

Did not cook very well. Ended up dry and the honey

Did not cook very well. Ended up dry and the honey glaze was too sweet. Will not be purchasing this again.

Cheap no taste. Bits of bacon cobbled together. P

Cheap no taste. Bits of bacon cobbled together. Poor value.

Not anywhere near as nice as the Tesco roast in th

Not anywhere near as nice as the Tesco roast in the bag gammon joint that apparently has been discontinued. This is quite tasteless in comparison. Would not buy again.