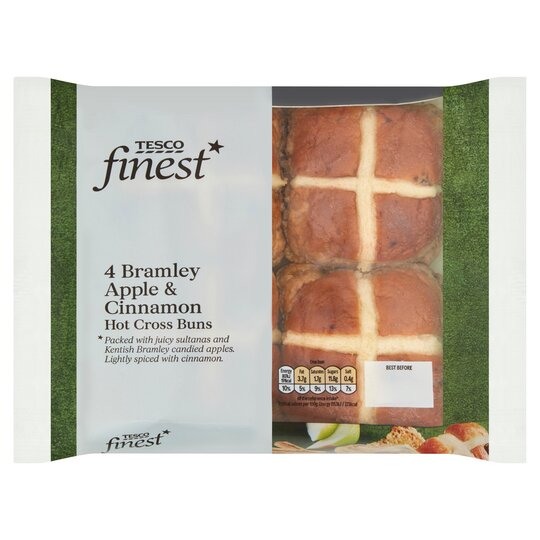 Suitable for home freezing. Ideally freeze as soon as possible after purchase but always by date shown. Defrost thoroughly for a minimum of 2 hours in a cool, dry place. Once defrosted, do not refreeze. Store in a cool, dry place and once opened in an airtight container.

Grill
Instructions: Slice in half. Place under a pre-heated grill for 1-2 minutes until golden brown. Turn once. Time: 1-2 mins, Temp: Medium

So yummy! Could be stronger in flavour but you can still taste it along with the the hot cross bun flavour, so so nice!!

Was expecting something really tasteful being apple and cinnamon, how disappointing, could barely taste any apple let alone the cinnamon, will by cheap and cheerful normal hot cross buns from now on would not recommend these at all...what a let down

I am always tempted by the idea of a hot cross bun but they are always undercooked and doughy.

We had the Apple and Cinnamon HX buns lightly toas

We had the Apple and Cinnamon HX buns lightly toasted - they were a big disappointment - no real scent of cinnamon, not enough fruit, they may as well have been plain tea cakes. Modern. H X Buns are bad enough with not enough chopped peal or other fruit or the traditional sticky sugar topping BUT the A. and C variety were a TOTAL WASTE OF INGREDIENTS

I’m very sorry to say these hot x buns with apple were horrible something very odd with the flavour!

I don't know what's finest about these?! They are so bland as to be tasteless and quite stodgy. I will stick to the 'normal' ones in future.

Same as all other excellent buns but with extra taste Could eat them every day.