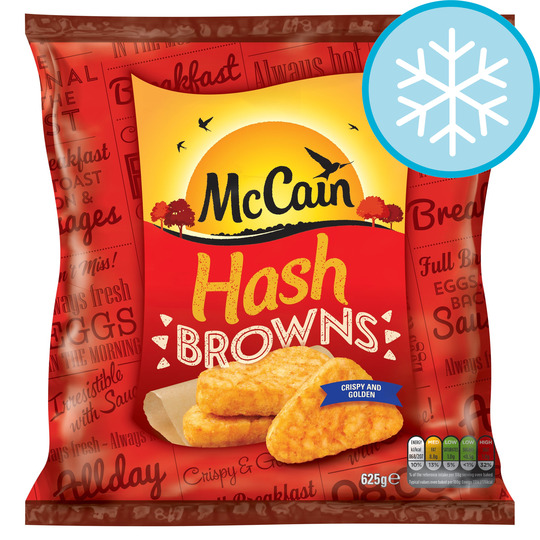 of the reference intake*
Typical values per 100g: Energy Per 100g Frozen

Keep frozen at -18°C or belowIf thawed do not refreeze

Oven cook
Instructions: Here's how to cook 500g of McCain Hash Browns. If cooking a different amount, adjust the cooking time accordingly.
To get the best results cook from frozen, our instructions are guidelines only. For the most delicious results, do not overcook!
Preheat the oven to 230°C/220°C Fan/Gas Mark 8.
Spread a single layer of hash browns onto a baking tray and pop it into the top of the oven.
Bake for 15 - 20 minutes, turning them every now and again, until they're lovely, crisp and light golden.

Had to throw them in the bin. I normally buy own brand from other supermarkets. I thought I would give these a go. Big mistake. They claim 'New recipe'. Maybe, but certainly not a 'better recipe'. Never again. I will stick with the cheaper ones. They are too thick, heavy and stodgy with hard bits that are impossible to eat.

I used to like McCain hash brows, but recently they started distributing "New Recipe" hash brows. They are quite awful and worse than Tesco's own brand hash browns. The batch which I'm using is "W12052020" and it has lot of black bits potato bits in the hash brows, perhaps they are from bad quality potatoes. The taste is bad too, the grated potato bits are bit chewy (again perhaps either a different potato kind or the new recipe cooking method), either way it is bad throughout. It is a shame that this New Recipe hash browns is a giant step back in terms of quality. I'll stick with other brands for now.

Absolute rubbish. These used to be very good Hash Browns, now stores own brand versions are far far better. Not a nice texture and when baked they don't hold together and just fall apart. Save your money and buy stores own.

Horrible, used to be nice but not anymore, don't crisp and don't taste cooked when they are over done. The stores own are alot nicer and cheaper.

Much crispier than other hashbrowns - lovely!

Sorry, thought they were quite tasteless. Couldn't taste the spices, or onion powder.

The best ! Great tast'ing hash browns. To a previous reviewer who saw 'black bits' :- the only black spots I saw were black pepper! I highly recommend this product,

The first few packets were great, but the last pack I threw out as they had lots of black bits in. Tesco’s ones are much better,

Regular Price £3, Clubcard Price £2. Offer valid until 05/10. If the Clubcard Price doesn't show in the guide price, don't worry, we'll take it off your total and you'll see it on your final receipt.

Regular Price £3, Clubcard Price £2. Offer valid until 05/10. If the Clubcard Price doesn't show in the guide price, don't worry, we'll take it off your total and you'll see it on your final receipt.