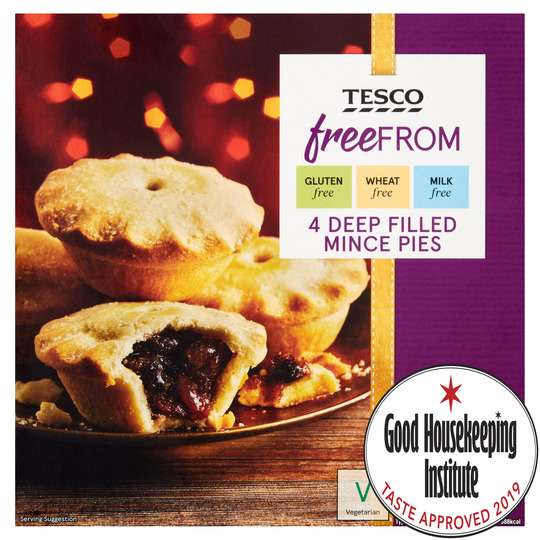 Oven cook
Instructions: Best served warm.
Can be eaten hot or cold.
Remove outer packaging.
Place pies (still in foil cases) on a baking tray.
Heat in the centre of a pre-heated oven.
190°C/Fan 170°C/Gas 5 5-6 mins
Important
Not suitable for microwave heating. All appliances vary, these are guidelines only.

Tesco has got these mince pies absolutely right.

The best 'Free From' mince pies I have found. The pastry is light but doesn't crumble in your hands, it has plenty of mince meat but best of all it has not been over sweetened. So many mince pies are plastered in sugar and the contents also have far to much sugar. These were very enjoyable and it would be hard to tell that they come from the 'Free From' range. I would definitely buy these again.

Usually great, but the box I had last week was great pastry, mushy filling. It was half full and half air. The Free From Iced Fruit Slices were the same.....thin, shallow and pasty. Bad batches or a supplier problem?

These are lovely. Just ordered some more. I don’t think anyone would know they were gluten free if you didn’t tell them.

In my opinion The pastry is great for free from st

In my opinion The pastry is great for free from standards, I have come across and tasted alot. like with tescos free from bread this is very tasty and very competitive! I will be buying more over festive period, very happy tesco with this product! well done!

well done Tesco! for thinking of us! no one else s

well done Tesco! for thinking of us! no one else seems to! I have had to go without mince pies previous Christmases because I couldn't get this anywhere! not to mention you have a fantastic range of 'free-from' ice-creams and desserts! Thank you

I have never been able to enjoy a mince pie until I tasted your pies. They are delicious, succulent, taste normal (which is a bonus) but even better than the ones with gluten so my family say. Try them as they are quite an experience!! The only negative is that they sell out far too quickly.

These pies tasted like pure sugar. Why is it that so many free from products are loaded with sugar. Is it to hide the taste of everything else in them. Threw them in the bin!

These Tesco Mince Pies were amongst the most awful gluten free products I have tried since being diagnosed as Coeliac 10 years ago. The pastry was very thick, soft, claggy and tasteless. They appeared to be cooked, as the tops were a golden brown, but turn them over and the base was wet, pale and bordering on being raw. Purchasing GF items for me is a necessity, not a lifestyle choice, At almost four times the price of non GF Mince Pies, I am very disappointed that Tesco has not produced a more palatable substitute. I was unable to leave a No Star rating, so to leave my review I have had to give one star.