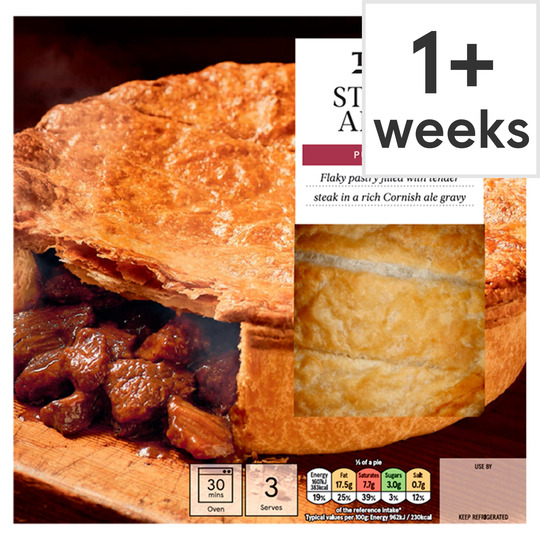 Made using British beef and ale.

I've given 4 stars as the crust was very hard, and I mean VERY hard. Other than that it was very tasty with a decent amount of meat.

Unable to use product

Usually love this but delivered on 6/3/21 with same use by date on box...hoping to use during the week..so unable/unwilling to use ..but was able to be refunded by ringing 0800 number. Difficult to check dates on a delivery when they are at the doorstep

Pastry was quite nice but very little meat in it and what there was wasn’t very nice.

Why is it that Tesco produce is so hit and miss? T

Why is it that Tesco produce is so hit and miss? The people who do quality control must only check once and once only. When it's nice it's really nice, but sometimes there's very little meat and taste.

Just awful, enough meat so maybe this issue has been addressed but a total lack of flavour. I would never usually bother taking the time to post a review so this tells you how much I hated it! Most of it went in the bin.

Disappointing on this occasion

Very disappointing, have had the same pie in previous weeks and it has been fine, but on this occasion all gravy, very very little meat, not Tesco's usual standard. In future I'll pay the extra for the Extra Special product, Ordinarily I wouldn't complain but I felt the issue needed to be pointed out to future buyers.

Had these pies on several occasions but on this oc

Had these pies on several occasions but on this occasion there was only 4 pieces of meat in the whole of the pie. Poor quality.

Good filling, But awful pastry so doughy. Try another one

Tasty gravy but hardly any meat.very poor value for money.said it served three in which case each person would have had one tiny piece of meat each.never again.