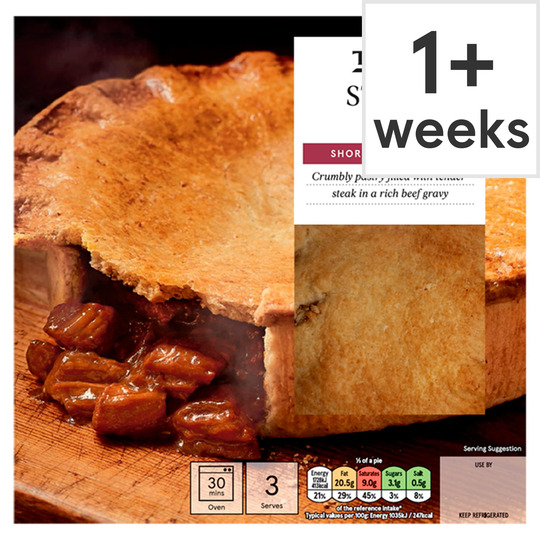 Instructions: Not suitable for microwave heating.

Pastry was like eating carboard, thick and tough. meat was edible but that's about it. Looks like everyone says the same, so its obvious they don't read the reviews

Barely edible. The filling badly needed seasoning and was low on meat content. The pastry was worse - heavy, dry and tasteless.

Pastry could be a lot better.

Meat and gravy were lovely. However, the shortcrust pastry was quite hard and not very nice.

Not great . Tried when staying in hotel, and could only microwave , but even so, not enough filling.

Absolutely tasteless, the pastry is dry and hard, the filling has hardly any chunks of steak and the only flavour was when you actually found a bit of meat. I'm can't understand how they could manage to make such a terrible pie, it's the worst thing I've eaten in a long time, I've eaten vegan pies that tasted more like meat than this thing.

This was the worst pie I have ever bought. The pastry was rock hard (not like home made as described on the packaging) and the filling tasteless. Even lots of gravy and hendersons relish couldn't improve it.

The pie lid was like concrete around the edge and very difficult to cut into when on the dinner plate. The meat inside was okayish but not much taste, I’m sure Tesco could do better.

I used to love these pies. The pastry was deliciou

I used to love these pies. The pastry was delicious and the filling meaty and tasty. Then they disappeared.I now have to shop on line and didn't trealise umtil now that they are back. I was happy until I read the reviews. I don't think I'll chance buying them again. They sound nothing like the pies I used to buy. I had to give them 1 star in order to submit the review.

Not much meat, what was there was tender but tasteless, the pastry was rock hard even with extra gravy poured over it. Very disappointing, will not buy again.