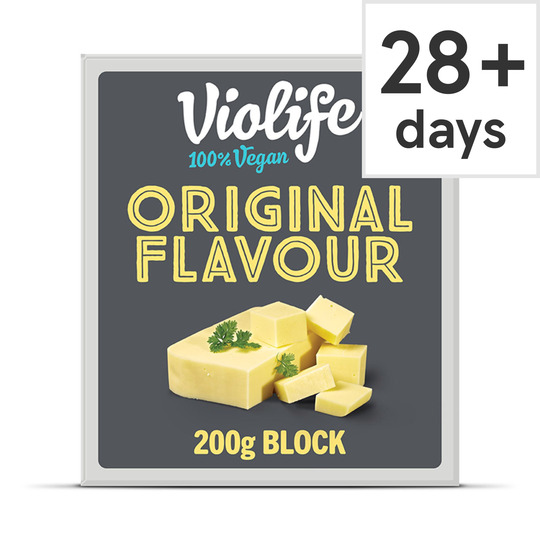 The packaging contains about 7 servings of 30g

This vegan cheese was disgusting. Tried a small pi

This vegan cheese was disgusting. Tried a small piece but had to spit it out onto a paper towel. The smell was revolting. Put it out for the birds and they didn’t touch it. Just don’t buy this cheese, a waste of money. At least I now know not to touch this brand of vegan products.

Absolutely disgusting, don’t waste your money. Smells disgusting while the is coconut overpowering! They’ve added a sweaty sock aroma to make it even worse !

Absolutely vile. I put it out for the East End p

Absolutely vile. I put it out for the East End pigeons and even they weren't too keen on it. Tates absolutely revolting

Best vegan cheddar. Great on toasties. A different texture and taste to real cheese, but as long as its not being eaten by itself from the block, it works perfectly as a cheddar replacement.

There are very few good vegan cheeses. This tasted like none of them. Was just a nasty thick sticky liquid when I attempted to grill it for a toastie after the missus bought it by mistake because she went tescos and left her glasses at home. Zero flavour and a total waste of money, especially when it's more expensive than normal cheese.

Nicest vegan cheese out there by miles

This is definitely the go-to vegan cheese. Nicest texture and taste, only one I've even known non-vegans to be able to stand too! Very faintly like Babybel taste. All other brands have a very briny potato starch taste, with a chalky texture. This one is different and a lot nicer.

This cheese is not the one to go for if you want one that melts nicely, tried to use it on a pizza, and also in a breakfast wrap but it just stayed in its original form