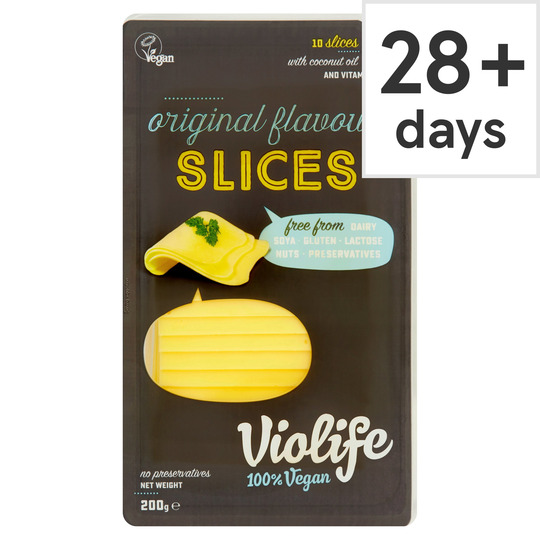 The packaging contains 10 slices of 20g

Vile stuff. Tried it on toast an hour ago and stil

Vile stuff. Tried it on toast an hour ago and still got a chemical taste in my mouth. The only similarity it has to cheese is that it's yellow. Tried it in sandwiches too and it's just not enjoyable as food. Tried drowning the rank taste with various condiments but it lingers like the smell of a backed up sink. Might try pouring bleach down my throat as it can't be much worse. Bought 2 packs and the 2nd pack is in the bin

This is fantastic, I love it,I tried it with a vegan burger and salad it was really nice.try it you might be surprised..

Not a keeper, boardy and no taste.

Tried this as many good reviews and I’m a vegetarian who’d like to be vegan. I tried a slice on it’s own and it’s like hard Edam. Put it in a sandwich and you can’t taste it at all, just a slice of something boardy in the bread. Not a fan, would rather not have anything than this I’m afraid but I will try it on a hot potato and toast too.

These are great. Would like to see the grated vers

These are great. Would like to see the grated version being stocked aswell

I have went on a vegan diet 6 weeks ago and have struggled to find anything that resembled cheese. I got this cheese today and it is fantastic texture is creamy and it actually tastes like cheese without a doubt the best vegan cheese I have tried

It has nice taste but I do wish you would also sell the mature version of this it is has a lovely cheesey flavour and I know you would sell a lot of the mature.

So nice that my sister who is not a vegan eats all my cheese. Shame its so expensive. But it is delicious! Don't seem to get bored of it!