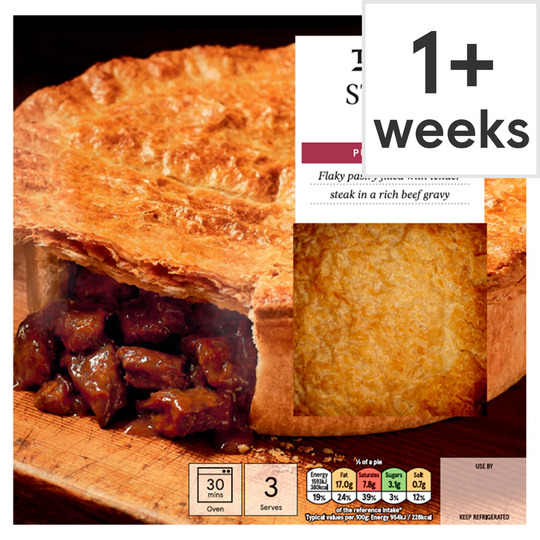 The filling was very good, but no way was that puf

The filling was very good, but no way was that puff pastry.

Not worth passing a few shops for!

The quality of the pastry and gravy was OK. There was plenty of meat. Sad to say the meat was particularly tough. I do realise that you cannot expect fillet steak at this price, but I slow cook cheap cuts of meat with much better results. Sorry Tesco, I will not be back for this one.

Gristle, tubes and little scraps of of meat

I've chewed my way through some pretty awful pies during my life and this one was up there with the worst of them. It all comes down to the filling, doesn't it? Plenty of gravy and passable pastry but, oh, the so-called meat! Half a dozen tiny pieces of ragged meat cubes, reminiscent of tinned cat food, was the sum total of 'steak' in my half of the pie. Would that it were steak; by the time I'd scraped away the ventricles and lumps of fat and gristle there was more on the side of the plate than in the middle. The other half of the pie, valiantly eaten by my partner with her eyes closed, was little better. So that was tonight's dinner ruined. Whoever made that revolting product needs a visit from the Tesco Pie Police.

Was a case of spot the meat and as the pie now only serves 3 there wasn't enough to go round. Therefore, not a product I am going to be repurchasing.

Absolutely tasteless, will not buy again.

This was easily the toughest pastry I've ever had - even the dog struggled! The filling was tasty enough, but the pastry and crust was tough as old boots. Even though I followed the cooking instructions, and have had no problems with other pies, I couldn't even cut it with a serrated knife. Such a shame.

Pastry was fine and the gravy however hardly any steak in the pie. Wouldn’t recommend.

Changed and not for the best

This used to be our favourite steak pie however the crust has changed, the pastry top is now really hard. This is the second one we have bought just to check and it is the same. ... and the pie is smaller now too. Shame!

The most tasteless thing I’ve ever eaten, quite dreadful