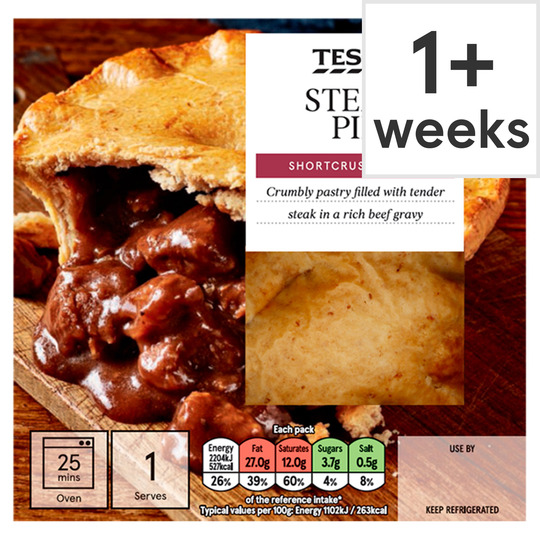 This item was substituted for a Puka Pie. Totally disgusting! Tasteless, no seasoning but reasonable amount of meat which was not grizzly but literally no taste at all.

Pastry was dry, solid and thick The filling was tasteless and had hardly any meat. Wouldn't recommend

The pastry was hard and lacked flavour. The filling was a brown mess, lacked flavour and looked nothing like the picture on the pack. Terrible product which doesn't deserve any stars (but you have to rate it for the site).

Worst steak pie I've ever had

Dreadful! My mother gave hers to the dog. Dog is indiscriminating and gobbled it up. I was jealous because my mother got four small pieces of steak whilst I only got three. The pastry was dry and tasteless. Did not resemble shortcrust. The gravy tasted of something I could not identify. The large size of the pie, in a huge box, bears no relation to the contents of the pastry. It's not even filled with gravy but half empty. The picture is nothing like the reality. Disappointed with this product.

There's plenty of steak chunks in the pie, the gra

There's plenty of steak chunks in the pie, the gravy is thick and tasty. The only downside is the pastry is slightly dry, but other than that I think this pie is nice and good value. It is also one of the only pies with such a low salt content, so it's good for people who have to watch the salt in their diet.

I had two, they were both under seasoned leading to a lack of depth in the sauce.

I purchased this pie with high expectations and upon cooking it I cut into the pie to find a huge void with 3 small pieces of meat inside covered by a thin gravy, the only good part was the pastry. This pie is of such poor quality I would not bother again if they were giving them away as it is more effort to cook it than it is worth.

Even the dog didn’t want it

Horrible rock hard meat, took one bite and gave it the dog. Even he didn’t want it.