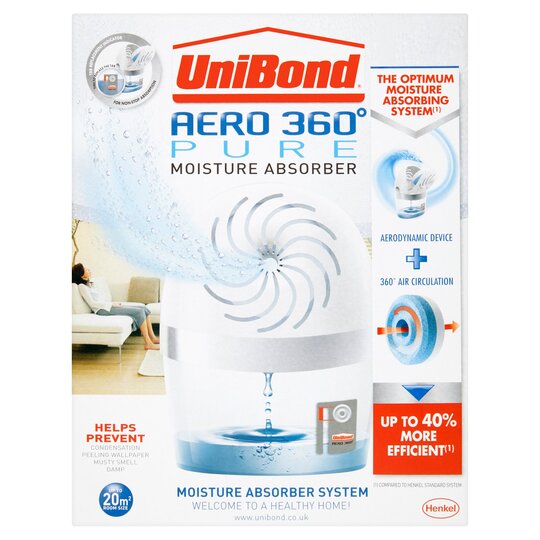 WARNING IMPORTANT: Do not allow the AERO 360° PURE Tab or salty solution to come into contact with metal surfaces (gold, chrome etc.), leather, fabrics, carpets, other food coverings or any other easily damaged surfaces. In case of contact, immediately wash with warm water. Keep out of reach children and pets. Warning: Causes serious eye irritation. May be corrosive to metals. If medical advice is needed, have product container or label at hand. Keep out of reach of children. Wear face protection. IF IN EYES: Rinse cautiously with water for several minutes. Remove contact lenses, if present and easy to do. Continue rinsing. If eye irritation persists: Get medical advice/attention.

Very disappointed. The dehumidifier leaks and i have tried seversl times to see how and where. Not only does it leak but has stained the wooden shelf i put it on. I have, in the past, bought cheaper ones - should have stuck with those!

No need to plug in just put in the car and it absorbs the water that used to freeze on the inside of the windscreen.

Easy to set up and starts working straight away

Bought this last month for my sons flat where he had major problems with condensation. The following morning the units were working in all the rooms and there was considerably less condensation.

Works OK for the money

Kept some damp at bay, I wouldn't use it for condensation as it didn't work.

I bought this to bring to my Spanish home as it had been empty for 3 months and during that time they had had rain for 3 weeks so thought my house might feel damp. As stated in instructions it started working within 12 hours of setting up last Friday and is still working fantastically.

I think these helped enormously to keep condensation to a minimum. You can see how much moisture they are collecting in the reservour.

It does remove water from air but tablet lasted a wk so need to re-spend already.

Simple to use but very effective in a small room, took out lots of moisture from around the window.

We bought this to try and absorb the moisture that causes the condensation on the bedroom window, and if anything placing this on the windowsill seemed to make the condensation worse. It barely absorbs any moisture at all. Placing it anywhere in the room has the same effect - none at all. 'Aerodynamic'? What has aerodynamics have to do with a static device with no moving parts? The only thing this device has done is lighten my wallet to the tune of ten quid. I have to give this one star to write the review, that is two stars more than it deserves.