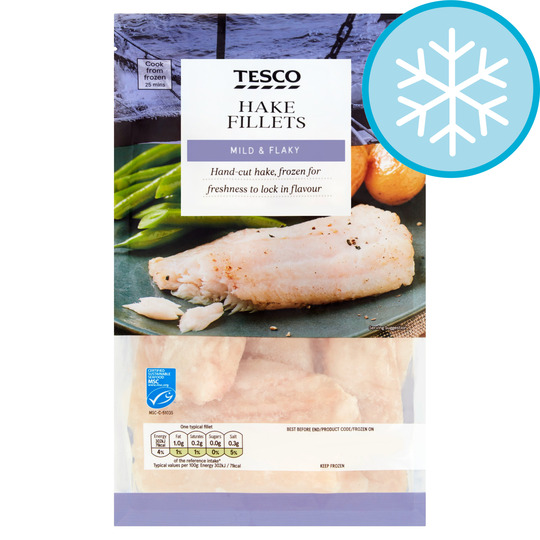 Instructions: 200°C/Fan 180°C/Gas 6 18-25 mins For best results oven cook from frozen. Place 2 fillets, brushed on both sides with a little olive oil, on kitchen foil. Place on a baking tray in the centre of a pre-heated oven for 18-25 minutes.

Instructions: From frozen: 800W / 900W 4 - 5 1/2 mins
Place 2 fillets, brushed on both sides with a little olive oil, on a microwaveable plate and cover loosely.
Cook on full power.
Leave to stand for 1 minute after cooking.

Grill
Instructions: Medium heat From frozen Place 2 fillets on a lightly buttered foil in the base of a grill pan and brushed on both sides with a little olive oil. Place under a pre-heated grill for 18-25 minutes. Turn once halfway during cooking.

Better than no fish at all

To be honest we would not buy frozen fish as a rule, but depending on what part of the country you live seems to determine whether you have a Fresh fish counter or Butchery dept at your local Tesco supermarket, So needs must as we have neither. We pan fried the Hake in a small amount of olive oil & was pleasantly surprised as it cooked without breaking up like others had suggested. Overall it made for a nice lunch & i would buy it again.

Let’s buy British fish, it’s hard to find at Tesco.British Hake is a lovely fish so why don’t Tesco sell it. There is something wrong with the taste of this. Don’t Tesco care? There is not a selection of British fish to buy.

I ordered frozen basa fillets which must have been out of stock and this hake was sent as a substitute. I accepted it as hake is usually quite nice white fish. This was awful, not much white and a lot of grey and dark bits in all the fillets. Never have this again EVER!!

Purchased as no frozen Basa fillets. Arrived as though had been thawed and refrozen/ stuck together with ice crystals on it. Gamely tried in kedgeree, several pieces tasted horrid; gave it another try, (glutton for punishment!)but sample tasting as though well out of date, didn’t eat rest. Happily no tummy upset. Will chuck remainder + unopened bag, although this looked less unfrozen/ refrozen, on day of black bin. Might be one batch of inadequate freezing, but won’t buy again.

Used in a quick fish pie. It may be good for nouri

Used in a quick fish pie. It may be good for nourishment but tasteless on the palette.

Bought it for the dog but he does not like it and I don't blame him. It has a terrible mushy texture and was brown and grey in colour which, does not look appetising at all. Will definitely not buy it again. What's wrong with British Hake Tesco?

Will not buy again

absolutely appalled to find that this product comes from China! Will definitely NOT be buying this prodct again

Very good. Hope Tesco don’t stop selling this fish as we need more variety to choose from, not just cod,haddock and salmon.

Terrible like other customers I too wish I had not bought this fish. It has an awful tang to it and smells. Do not buy!