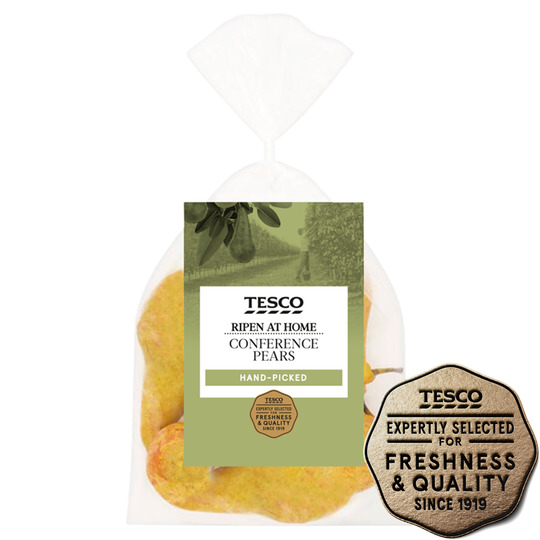 I purchased these 10 days ago as I see on the bag 'ripen at home' as I also prefer a Conference Pear to a Williams variety. I used the last one yesterday and was so pleased as it was still hard. If you do prefer to eat a hard pear (effectively like an apple), these are the ones for you.

These were a substitute for the ripe and ready I usually buy and I kept them as I didn't have any pears left however, after nearly a week they are still rock hard and I don't think they are going to ripen. I tried one as sometimes with pears the skin is hard but inside it's softer but not the case with these! If they sub with these again I will return.

Unless they are British or South African, I wouldn't touch them with a bargepole. Have thrown several bags away as the Belgian, Netherlands of late never ripen and are like rocks. Am waiting for the British Conference to appear.

Been buying these pears for some time but having bought two packs over a week ago I’m still waiting for them to ripen, they’re hard and tasteless also rubbery. I would like to be recompensed for these two packs of pears. Only fit for the compost heap.

Look before before you buy

The last pack was poor quality one badly damaged had been cut, but the quality of these Pears has never been the best. The choice is take it or leave it, has there is no other

the last time I bought these pears they were still

the last time I bought these pears they were still hard after 2 weeks. reluctant to buy them again.

Ok if you want to wait six weeks to eat them. I tried one the other day that I had for four weeks and it was still rock hard. Tasteless.

All British Conference Pears though the label on the bag says From Netherlands!!! I am keen to support British farmers and other food suppliers so very disappopinted in this one

When I opened the pack, I could see they were marked quite badly but when I inspected them further, three were very badly bruised and turned out to be inedible. The rest of the pack weren't much better and I had to cut out the damaged bits before eating what turned out to be mushy pears. Ugh!