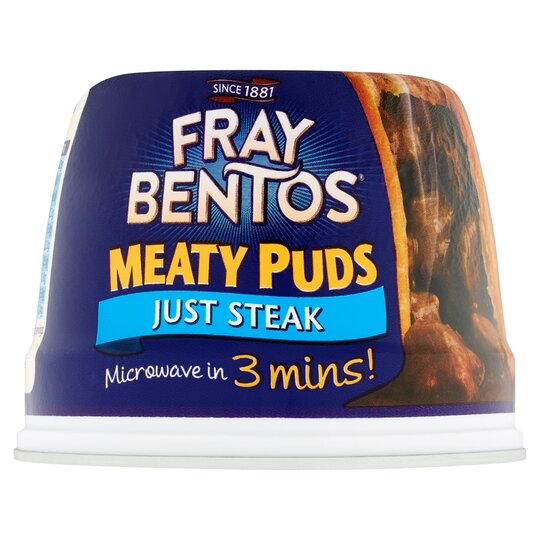 Caution: Although every effort is made to remove all bones, some may remain.

I really don't see how they can call this a Meaty Pud when it has 15% meat!!!

should be renamed GRAVY PUD

You either like these or you don't. If you like Fray Bentos pies, you might well like these too. I grew up with Fray Bentos pies as a treat and very occasionally a pudding, and while I understand the other reviews, I don't agree. The thing I had most trepidation about was the fact you microwave these now rather than boil for an hour. The pastry is a suet pastry - which is more like a dumpling than anything else. You either like that or you hate it. I don't think there's a middle ground. (I like it). The filling otherwise is pretty much the same as a fray bentos pie. It might have less meat or liquid in than it used to - being cooked upside now from how it used to - that might've been a change they had to make. I would say now that while the older one would've served 2 (at a push) this is pretty much the right size for 1 person per pie now. If you remember what they used to be like and liked them then, then you'll probably like them now too. 3 minutes for a fray bentos steak (or steak and kidney) pudding though is pretty good going. I'll probably copy this over to the steak and kidney pudding though because these comments apply equally there too. (Having tried both :-) ) Having these with some cheap oven chips would be a nice cheap special meal in my book. :-)

I'm sure these were a lot better years ago.

Awful tasting and very little meat, can't call it steak. What is there is tiny bits and is very fatty. After cooking a lot of oil comes on to your plate, Disgusting. I'm sure these were a lot better years ago.

This pudding was the worst I have ever had. The pastry was too thick and it was short of meat. Never again

Vile - what was supposed to be pastry was just sl

Do not use this product

I have just had one of these for my dinner. Terrible hardly any meat, a few little bits of beef, a little gravy and masses of gooey pudding which I found inedible. I would not buy this product again.

There has to be a case for the trades descriptions act here. The pudding is NOTHING like the packaging suggests. Mine was filled to about 1/4 with a meat and gravy mush. No real pieces and the amount of filling is ridiculously small. I bought 4. Tried 1. 3 are going in the bin.