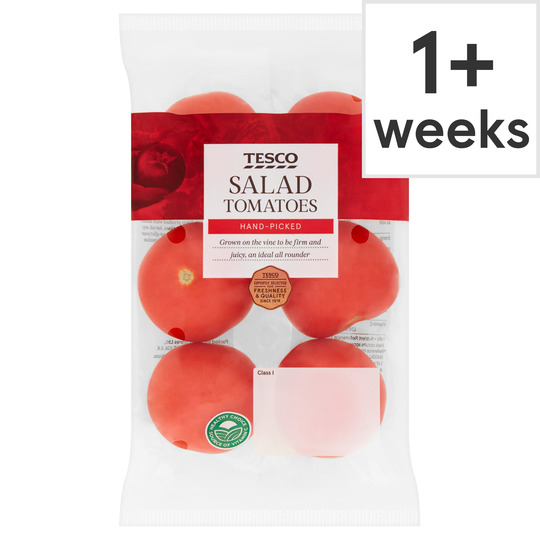 Why is this tomato so hard?!!

Got two rotten tomatoes on the bag and all the other ones were hard as a rock. Super weird

What on earth as happened to Tesco fresh produce ? All their tomatoes are now hard & tasteless. They used to supply Temptation variety mostly grown in Kent which were delicious, but no longer. With all the cut backs Tesco is making they are sacrificing quality. I will start to shop around.

worst tomatoes in the world ?

I have had the same pack before and they have been ok, if nothing special. This variety is called Ramos. When I got them home they were too hard to eat so I put them to one side. I eventually used half of them in a diced salad. Today I found the rest of them , several weeks old. One was mouldy so I decided to cut the other two in half and fry them as part of my dinner. Still hard as bullets. I fried them for about 10 minutes, long enough to reduce most tomatoes to mush. No, still hard. The core was like wood, the skin like like a leather overcoat, the flesh still hard. There was no discernable taste. I know that modern tomatoes are grown for shelf life and durability but this is just going too far. It seems like the variety brief was, ''get me something tomato shaped, red, that will last for ever. You must be able to drop a full crate of them from a height of ten feet without damage. There are no considerations of taste or texture at all. Quite honestly, the very worst pack of tomatoes I ever bought, and thats saying something. I'm going back to when I get them for just about ten weeks of the year, straight out of my garden. Proper tomatoes, juicy, tender and bursting with flavour. These were just awful.

2 rotten tomatos in the pack. had the same with lemons from them

At the moment they are Raymos which is an absolutely delicious tomato, tastes like the ones I grow at home. I eat tomatoes every day in and out of season and these are as good as they get.Delicious

The Tomatoes came split and oozing

Horrible. Hard, juiceless and tasteless. Not even worth the offer price. Yuk!

These tomatoes are just perfect for a lunch salad,

These tomatoes are just perfect for a lunch salad, they cut into pieces very nicely. Great value.