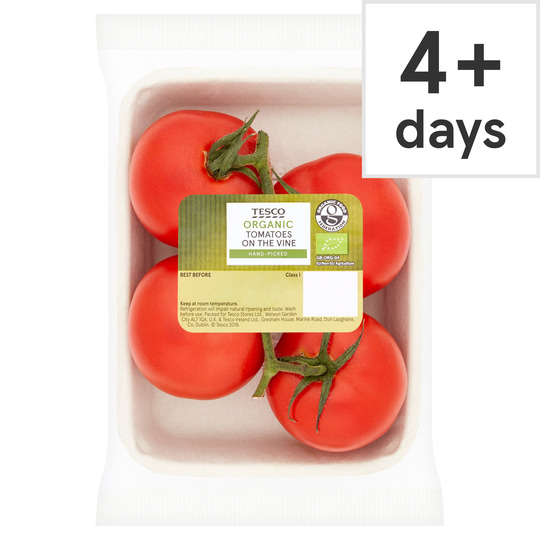 To enjoy the flavour of these tomatoes at their best:  Keep at room temperature. Refrigeration will impair natural ripening and taste.

Very good if you get lucky and the picker can read

Very good if you get lucky and the picker can read the word LARGE!!!

The Smell of these Tomatoes tells me that they're Organic. These are just like the ones i had from The "Allotments" when i was kid! They taste beautiful too but i make sure that i take one from the fridge A few hours before i want to eat one because you lose too much flavour when they're cold. Don't expect them to last as long as what is now considered to be "Normal tomatoes" because they have been modified to have a thicker skin (they don't bruise as easily in transit) they used to just use "Cross Pollination" but i dread to think these days what "they" do 🤔 In conclusion, i am delighted that Tesco are stocking these wonderfully tasty Organic Tomatoes ☺️

Not ripe. Hollow, No flesh inside and tasteless.

Best UK organic tomatoes. Best tomatoes we have had for a long time.

The tomatoes were hard with not much taste, under ripe i suppose, they still looked good 8 days later but had to throw 2 away.

mushy poor quality - not worth the organic price

mushy tasting like old stale veg - very disappointing! this produce has been consistently subpar for the last few months.

These tomatoes looked lovely but they were very hard and had no taste to them I could not even cook with them. ( very disappointing )

disgusting, had to throw them away

disgusting, had to throw them away

Twice now I have bought these large organic tomatoes and when unpacked they had weird black spots on them which rot (frost damage?). I've had to compost both lots before their best before date.The wee organic cherry toms seem fine. Very disappointed!