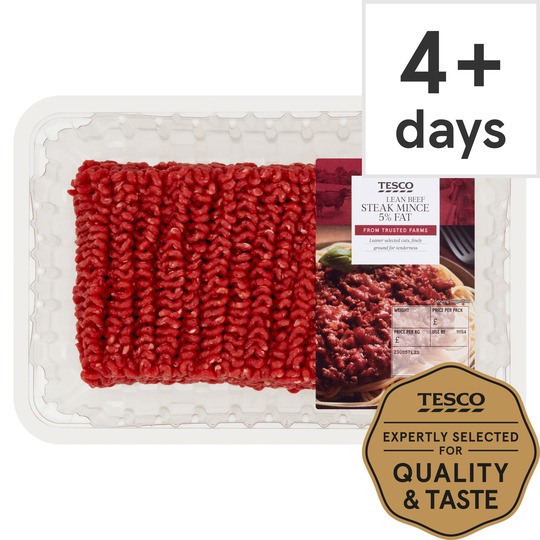 Not suitable for cooking from frozen. Follow the preparation guidelines above. Once defrosted use within 24 hours and do not refreeze. Defrost thoroughly for a minimum of 12 hours in the fridge. Keep refrigerated. This product may have been previously frozen and restored to chill temperatures under carefully controlled conditions. Defrosted: It is suitable for freezing.

Made the best cottage pie I have had..

Had one of these 750g packs in my last delivery and used half of it for a cottage pie, with carrots, celery, onions, two beef stock cubes dissolved in a cup of hot water, tin of plum tomatoes roughly chopped, two bay leaves and lashings of worcester sauce. Cooked together and simmered on the hob for an hour until the mix was not runny then put in a big casserole dish to cool down and set a bit. Topped with plain soft boiled potatoes mashed in the pan with a fork and some chopped cheddar mixed in. Left in the fridge overnight then cooked in the oven next morning for about 45 minutes until the top was browning nicely. It made 3 or 4 portions of possibly the best cottage pie I have tasted so the beef mince must be good stuff. Served with marrowfat peas it just needed microwaving for dinners when wanted. Cooked before 8am it was done on the cheap rate electric too so was good value as well as tasty and convenient. Portions can be kept in the fridge for a few days or frozen and taste just as good.

Good all round mince.

Its very lean so will lack some taste compared to mince with a higher fat content (you get a lot of flavour from fat). It keeps its shape when cooked, won't dissolve down into the stock/sauce so if you like 'mushy' mince you'll need to cook it longer. Good all round mince that we use on a regular basis.

Turned brown before use by date

Mince was brown and foul smelling before use by da

Mince was brown and foul smelling before use by date.

Only two reviews this year - thay says it all!

Quality has gone down tremendously since 'price matching'. Lots of gristle and suchlike, totally different from what I pulled from the bottom of the deep freezer. The quality of that was superb and made a very tasty lasagne. This mince is only suitable for bulk cooking with lots of ingredients - maybe a chilli.

It's a matter of routine placing this large pack of mince on our order. Being just a couple we split it in half and one half is frozen immediately after delivery and the other transformed into a Saturday tea. Tonight it made a simple Lasagne which is big enough for 4 so half can be rechauffed for a lunch or frozen. It's a versatile product. One of my favourites is a Shepherdess Pie which is a version of Cottage Pie with Carrot and Potato Mash used on top.

Great for making home made burgers and freezing th

Great for making home made burgers and freezing them. Then cook them from frozen.

This mince is really tasty the best mince I have ever had.