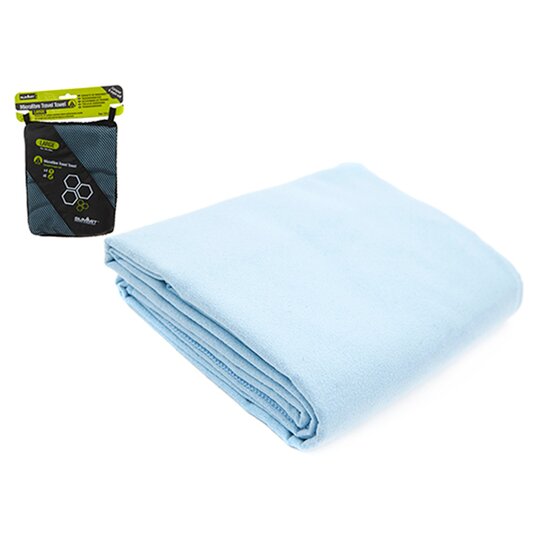 So happy i bought it. Lightweight and need so little space. Want to buy again for friends but it is not available in tesco now. Too bad

first class does what it say`s on the the packet !!!!

OK this is a small microfibre towel suitable for travel use. Good value.

Perfect, just size description could be more clear - it is really between a hand towel and body towel size

Same material and as good as a similar branded product, and cheaper

I BOUGHT THIS TOWEL FOR A CAMPING TRIP BUT IT IS GREAT FOR ANY DAY OUT OR TRIP WHERE YOU WANT TO PACK LIGHT,, IT DRY'S YOU WELL AND DRIES QUICKLY READY TO USE AGAIN.

Been using this a couple of weeks, it folds down to an incredibly small size that is very useful. Works almost as well as a normal towel, just feels a bit different, but definitely worthwhile for the compactness. Might have been tempted to get the bigger one, since I didn't realise just how small it would fold. Does also dry very quickly.

Not a bath sized towel but then what do you expect for a camping towel. Love the mesh bag it comes in, keeps it very neat and compact.

First travel towel, haven't used as yet but great value for money. Only issue is that the dimensions of the actual towel are smaller than those advertised - Height is actually 120. Fine for a man but if you're a taller woman it won't be sufficient. I am 5'5 or so, about 165cm, and it just covers me like a normal towel would - only just!