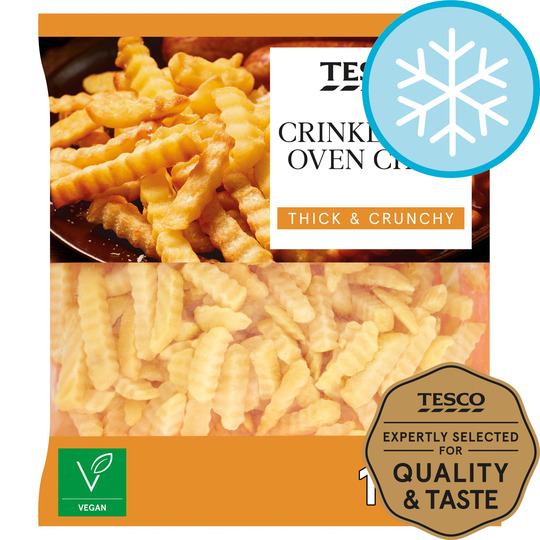 7%of the reference intake
Saturates
2.6g

13%of the reference intake
Sugars
0.5g

2%of the reference intake

Instructions: Temperature: 220, 200, 7
Time: 15-18mins
Oven From Frozen Instructions. 220°C/ Fan 200°C/ Gas 7 15-18 mins. For best results oven cook from frozen. Pre-heat oven to correct temperature. Place in a single layer on a baking tray in the centre of a pre-heated oven for 15-18 minutes. Turn halfway through cooking time. Cook to a golden yellow colour and do not overcook. Do not exceed stated cooking temperature or time. When preparing smaller portions, reduce cooking time to avoid excess browning.

Caution: Do not eat raw.Warning: Plastic bags can be dangerous.To avoid danger of suffocation, keep this bag away from babies and small children.

these are good, need some herbs but they're great

these are good, need some herbs but they're great for a quick and easy dinner

Tasteless, greasy, pale-coloured chips, which take much longer to cook than the recommended time of 15-18 mins. Even after an extra 7-9 mins they are still pale, greasy and tasteless. Not a patch on the very nice Tesco Homestyle oven chips - the crinkle-cut version of which was delicious. I bought these a couple of weeks ago but they seem to be no longer available.

Surprised to read some of the comments I found these chips to be very nice and cooked perfectly in 20 minutes. Our oven is pretty hot so imagine you need to be at a good temperature to ensure chips are cooked nice and even. Overall found them to be less greasy then some other varieties and will be buying again.

My usual size McCain Crinkle Chips were out of stock and as I didn't want to spend £4 on their larger bag of Crinkle Chips, I decided to try these Tesco ones. Although unlike some of the other reviews I didn't have any problems cooking them, they really are the most tasteless chips imaginable and I certainly won't be buying them again. However, the seagulls did seem to enjoy them when I threw the rest of the bag out on the bird table!

they are nice chips.But on the instructions it say

they are nice chips.But on the instructions it says cook for 15 to 18 minutes. this must be a mistake.surely it should be 25 to 28 minutes.I made them as it describes but they werent cooked.

These are uneven in size, tasteless and very diffi

These are uneven in size, tasteless and very difficult to get brown and crispy. They're cheap but not worth even that. Not a patch on McCain's.

They don’t cook. Still hard potato and not crisp after cooking for an hour

I don’ know when Tesco changed this product, but I now find these chips disgusting. They have some sort of coating & the inside is nothing like potato chip.

These chips took over an hour in a very hot oven and were still hard and tasteless. Must be very poor potatoes and I would never buy again.