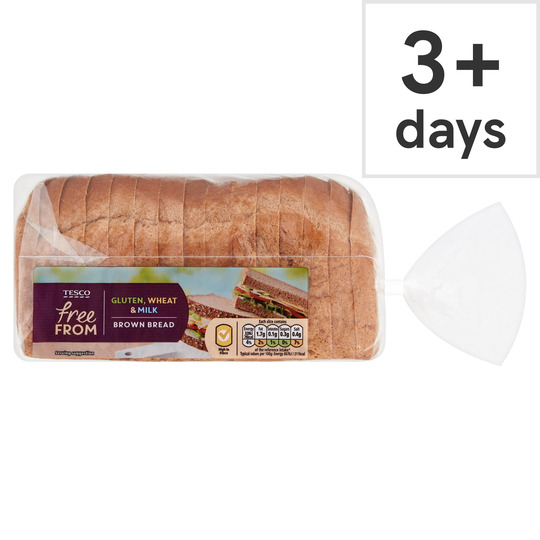 Suitable for home freezing. Ideally freeze as soon as possible after purchase but always by 'use by' date shown. Defrost thoroughly for a minimum of 2 hours in the fridge. Once defrosted, do not refreeze. Store in a cool dry place.

The slices fell apart as soon as out of the bag and had large holes. I have not been able to make a sandwich out of it.

Falls apart when u remove a slice or 2, don't think I've had more than 4 slices out of 3 loafs that has not fallen apart. Won't buy again.

Best GF Bread Out There

I'm not coeliac but don't think wheat/gluten is healthy. Tried pretty much every GF bread at least once so tasted all major supermarket brands and many bread maker brands. This has by far the best texture and taste. No 'powdery' effect or after texture on the tongue and it has a slight stretchiness usually found in 'normal' bread. It tastes very good and is reasonably priced. I usually toast it. There is only one other GF loaf to compare and without mentioning makers it's a Sourdough Cob

This is the really best free from brown bread. Soft and tasty and I can even eat the crusts which on some I can't. Its' great toasted for breakfast as well as good for sandwiches.

Anyone on a gluten free diet knows that getting a

Anyone on a gluten free diet knows that getting a decent bread is not east. I came across this one purely because my regular brand was out of stock and was pleasantly surprised. Very good taste and texture for gluten free bread, I would recommend it’s well worth trying.

This WAS a great product--five star, one of the few gluten free products that was also corn/maize free. It held together well, toasted well, and was pretty tasty (not too dry like a lot of similar products). HOWEVER, the recipe has now changed and now includes maize. The tyranny of corn is killing a lot of us; would have been nice to have had at least one 'free from' product I could eat!

I really enjoyed this, used to buy the genius bread but thought I would try cheaper tesco own brand and was pleasently surprised, toasted it doesn't even taste gluten free. Actually prefer this now to the original.

Every single slice was broken in half, threw the lot in the bin; never again