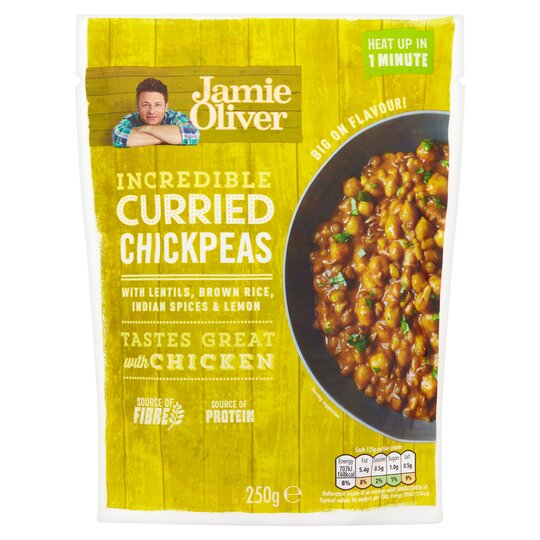 8%of the reference intake
Saturates
0.5g

2%of the reference intake
Sugars
1.0g

1%of the reference intake
Salt
0.5g

9%of the reference intake

of the reference intake*
Typical values per 100g: Energy 565kJ/135kcal

Made in France, with spices from India and various other countries

If you like Indian style chickpeas you’ll like this. Granted it doesn’t look too great but it’s tasty. I mix a little yoghurt into it as it is a little dry.

I don’t usually write reviews but feel I have to with this one. I ate it but I won’t be buying it again. The texture of it isn’t very nice. It looks like cat food. I thought something from Jamie Oliver would surely have tasted better than this, I thought wrong.

A strange mixture and rather dry, with both of us

A strange mixture and rather dry, with both of us finding it to be most unpleasant, leaving the bulk, after just a mouthful each.

I love it, tastes amazing.

This product was awful. It had a strange bad flavour, almost inedible and left me with a serious stomach upset. I followed the heating instructions and started eating it by itself but had to stop after a couple of mouthfuls.I was up all night with an upset stomach. The product is described as being incredible and gorgeous, which is a poor choice of adjectives for such an awful Product.

Great on Toast ! my teenager will now eat something healthy that he can make himself thanks to this product !!!!! usually, unless I actually make it for him and deliver it directly unto his waiting hand, my son will make himself only pizza or chip based meals however we accidently happened apon this little gem of a solution when he popped a packet in the microwave and dolloped it onto a couple of slices of toast ! I have now been given orders to buy it again so I am HAPPY MUMMY