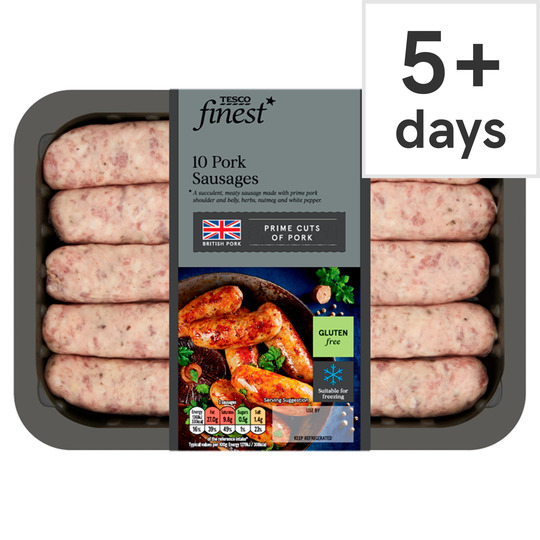 Suitable for home freezing. Ideally freeze as soon as possible after purchase but always by 'use by' date shown. Not suitable for cooking from frozen. Defrost thoroughly for a minimum of 12 hours in the fridge. Follow the preparation guidelines above. Once opened, keep refrigerated and consume within 2 days and by ‘use by’ date shown. Keep refrigerated.

The sausages are tasty when you get to them. The s

The sausages are tasty when you get to them. The skin is far to thick and actually tough. I will not buy them again

What have you done with these sausages, and the others in the Finest range. The skins are inedible and burst during cooking releasing a lot of fat. There was I thinking they were still 98% meat, then I discover they're now only 90%. Like a lot of others, I won't be buying these again and will go to the butchers instead.

Why has this product had its pork content reduced from 97% t just 90%? I have hacked my last order and the product codes match, but asi said, the pork content has been reduced, but not the price!

Terrible leathery skins, contents were like paper, sawdust, bird feeder fat balls and somewhere a bit of pork. 90 year old mother reckons they were like what they got in the war just worse

Taste and meat content was very good. But the skins were tough as old boots. I would not buy again because of this.

These were terrible couldnt chew threw the skins

Awful, the casings were ridiculously chewy, they were full of fat and the meat was terrible. Defiantly not finest in my opinion!

This went down a treat at the weekend with the family. Really impressed and will buy again

I used to love these sausages with 97% pork because they were really tasty. For a while now I’ve wondered why they weren’t so nice and why more water and fat seemed to come out of them. When I checked the pork content again, the penny dropped! Only 90% now and it makes a huge difference. Certainly not worth the money now and will not buy in future.

Thing's ain't what they used be.

These really have deteriorated and I think the pork content has dropped too, shall be going back to Hecks.