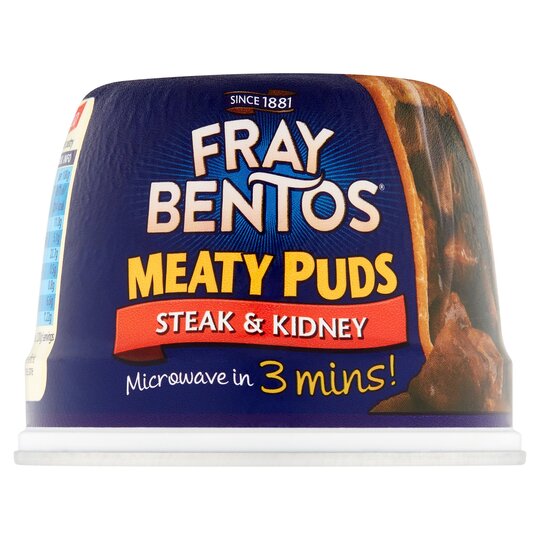 Caution: Although every effort is made to remove all bones, some may remain.

My old Nan used to make the very best steak and kidney pudding ever, so I looked forward to this - being able to microwave it was a huge bonus! What a complete letdown. Calling this a ‘meaty pud’ is against the trades descriptions act. For a 400g tin, I guess the meat content (minus all the gravy and oil) was approximately 25g. Of which about 5g was steak. The pudding itself was so thick and horrible that I couldn’t eat it. Revolting. Perhaps Fray Bentos should rename it ‘Thick Suet - hunt the meat. It’ll keep your kids quiet for hours as they try to fond the hidden ingredient’. Very poor. Wish I’d had a sandwich instead.

How do you get the lid off?

Quality ok.Can took 15 minutes to get the lid off!

If you've ever had home made steak and kidney then avoid this like the plague. Heavy, tastless, lump of suet with micro chunks of meat.

You either like these or you don't. (I'm popping a copy of this review on both this and their "just steak" version of this pudding - since I've tried both and the comments apply to both) If you like Fray Bentos pies, you might well like these too. I grew up with Fray Bentos pies as a treat and very occasionally a pudding, and while I understand the other reviews, I don't agree. The thing I had most trepidation about was the fact you microwave these now rather than boil for an hour. The pastry is a suet pastry - which is more like a dumpling than anything else. You either like that or you hate it. I don't think there's a middle ground. (I like it). The filling otherwise is pretty much the same as a fray bentos pie. It might have less meat or liquid in than it used to - being cooked upside now from how it used to - that might've been a change they had to make. I would say now that while the older one would've served 2 (at a push) this is pretty much the right size for 1 person per pie now. If you remember what they used to be like and liked them then, then you'll probably like them now too. 3 minutes for a fray bentos steak and kidney (or just steak) pudding though is pretty good going. Having these with some cheap oven chips would be a nice cheap special meal in my book. :-)

Absolutely awful, the so called pastry was like rubbery cardboard, utterly inedible. The so called meat was like some sort of mince in jelly, looked more like cat food and the amount of oil it the whole thing was swimming in when it came out of the microwave was repulsive. It was probably one of the worst products I have ever tasted and 90% of it went in the bin!

Thick uneatable suet pastry, meat not much like st

Thick uneatable suet pastry, meat not much like steak or kidney.will not be ordering this product ever again.

Awful would not buy again

I could not believe how awful the so called pudding was. The filling was not bad but rather sparse but the pudding was nothing like a suet pudding should be it was dense and chewy and I found it inedible. I used to love the individual ones they made which you had to steam. They have sacrificed quality for speed in the microwave.Would not recommend.

So pleased I used this on the day my order arrived

So pleased I used this on the day my order arrived, as it meant I had other food still. One piece and then in the bin.I don`t even think my bin enjoyed it. Not one good thing to say about it, sorry.

This is Comfort Food. Yes. Thick suet crust, and not overfilled, so you may to serve with some extra steak & kidney filling in order to serve two. Tasty. No complaints from the better half.