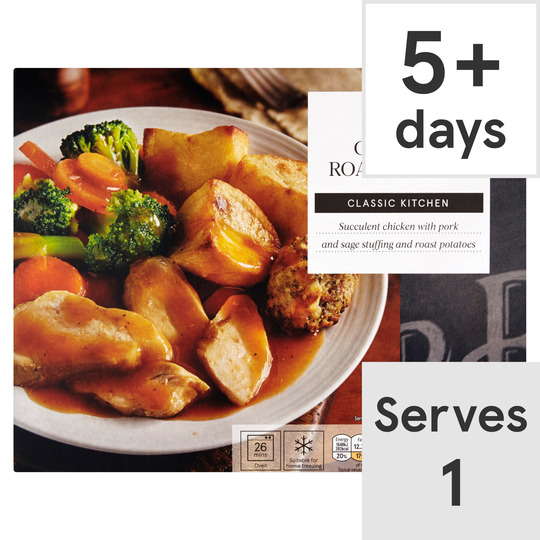 Suitable for home freezing. Ideally freeze as soon as possible after purchase but always by 'use by' date shown. Defrost thoroughly for a minimum of 12 hours in the refrigerator. Once defrosted, do not refreeze. Follow the preparation guidelines above. Keep refrigerated.

Instructions: For best results oven heat. 190°C / Fan 170°C/ Gas 5 20-25 mins Pierce film lid several times on chicken and vegetable compartments. Remove stuffing ball and place to one side. Place potatoes directly onto a baking tray, with the chicken and vegetable compartments in the centre of a pre-heated oven for 10 minutes. Add the stuffing ball onto the baking tray and heat for a further 10-15 minutes. Leave to stand for 1 minute after heating. Stir before serving.

Made using British chicken and pork

Poor quality. Used to be sliced of chicken now sma

Really don't waste your time. Ruined Sunday dinner. Hardly any chicken, vegetable not peeled. Don't have a receipt so can't get money back. Never again. Be warned.

Inedible. I wanted to give no stars as it was that awful, but wouldn’t allow me.One star is far too much. Paid extra to buy Finest range. Don’t bother. Veg so hard it was nearly raw. Everything including meat and gravy tasteless. Complete meal binned. Really disappointed. What a waste of money.

This was so disappointing. The chicken consisted

This was so disappointing. The chicken consisted of a few scraps of chicken. I had expected at least a couple of decent slices , not scraps. The roast potatoes were ok but the veg. looked ok before heating but turned out soggy after heating.

My elderly neighbour liked this much better than t

My elderly neighbour liked this much better than the Birds Eye version, with it's miniscule potatoes! You get a roast spuds, mixed veg, a ball of stuffing and chicken pieces in gravy (not a chunk). This certainly wouldn't be enough for a younger person's appetite but it's fine for older folk who don't eat so much and don't want the hassle of cooking all the separate items.

This was the worst meal we have had from Tesco The

Picture on the package is misleading - it implies there is chicken breast but all that was in the one I bought were a few strips of chicken. Disappointing, misleading and not good value.

Chicken too dry,potatoes ok, carrots and peas too

Too much garlic puree.

The dinner contains a lot of garlic puree it leaves a horrible taste in the mouth. Not sure if the garlic is in the gravy but it's yuk. I won't be ordering again.

BABY FOOD! Will NEVER BUY THIS AGAIN!! I’m 57 and just bought it as my husband was away and I was not going to cook just for myself! This is just awful!! TESCO UP YOUR GAME! This is food for people who are in their 90’s tasteless! Chicken tastes artificial, gravy tastes like water!!