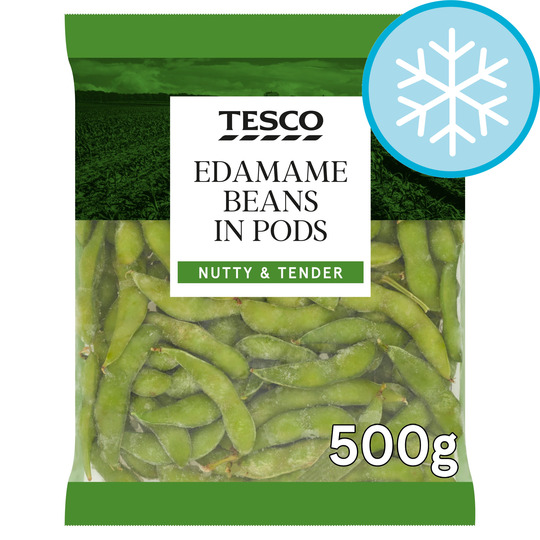 4%of the reference intake
Saturates
0.4g

2%of the reference intake
Sugars
0.8g

Keep frozen at -18C or cooler. Important: If food has thawed, do not refreeze.

Instructions: 800W 4 mins 30 secs / 900W 4 mins
Place into a microwaveable bowl and cover.
Cook on full power.
Leave to stand after cooking until finger hot.
Squeeze the beans from the pods before consuming.

Hob
Instructions: For best results boil from frozen.
Place in a saucepan of boiling water.
Bring to the boil.
Cover and simmer for 5-6 mins.
Drain well and leave to stand after cooking until finger hot.
Squeeze the beans from the pods before consuming.

Warning: Do not eat raw.

Waste of Money and Packaging

Only bought these because the shelled beans were out of stock. Each pod contains just 2 or 3 beans meaning that most of the packet consists of the inedible pods which are thrown away. An expensive and wasteful way to buy frozen soya beans. Won't be buying these again.

A waste of packaging

This is a rubbish purchase. It is not obvious when you first buy them that you don’t eat the pods. The reviews seem to be half people who realise that this is a waste of everyone’s time and condescending people who like to laugh at other people’s expense. You do know what condescending means, don’t you?

Only bought these as the shelled ones were out of

Only bought these as the shelled ones were out of stock. They are a waste of money as can only be cooked from frozen and the pods are inedible, therefore need to be shelled while hot !

DO NOT EAT THE PODS/SHELLS -- they are inedible and not meant to be eaten. This is how you prepare and eat edamame from the shell (they are a DELICIOUS and SUPER HEALTHY SNACK or NIBBLE): 1. Steam the beans in their pods with a sprinkling of salt. 2. SERVE the beans in their pods in one bowl with a second empty bowl for shells later. 3. SNACK on the beans by REMOVING THE PODS/SHELLS with your fingers or by simply pressing/squeezing the beans out of their pods so they pop straight into your mouth. It may sound complicated, but you will find when you do this that it is fun and easy to cook, serve, and eat edamame in their pods. And they are REALLY tasty.

Just as good as any restaurant

Just trying to even out the review score from the people that gave it 1 star cos they ate the wrong parts...

You don't eat the shells worth the effort

If any of you have ever been to expensive Australasia restaurant in Manchester they serve these having been steamed first and then tossed in soy sauce and sesame oil. WOW - our entire table of 12 couldn't get enough of them. You don't eat the skins but they pop out of the shells so easily it isn't an issue and sucking on the shell that has hints of soy and sesame oil - well it is simply delicious. I enjoyed them so much I couldn't wait to make them myself and they are delicious even when made at home.

In the hope of preventing further savagely brutal reviews, it needs to be stressed, that, just like broadbeans, you do NOT eat the pods!! Steam the pods for about 6 minutes. Sprinkle sea-salt on them. When they are not too hot to touch, lift one to your mouth, and using your index fingers and thumbs, squeeze a soybean at a time straight into your mouth. A splendid taste of Japan, just like being in a nice izakaya :)

To the person who left a review saying these were 'stringy' - erm...don't eat the pods! It's the seeds inside you should be eating and they're pretty good. Just defrost a handful and then pop the seeds out & then use those seeds in your recipes. They come out quite easily.

There is no point in buying these in their pods

Very disappointing. I assumed that the pods would be edible like mange tout otherwise what’s the point? Unfortunately I hadn’t read the instructions fully as it says squeeze the beans from the pod before serving. THERE IS NO POINT IN THESE just buy the frozen beans.