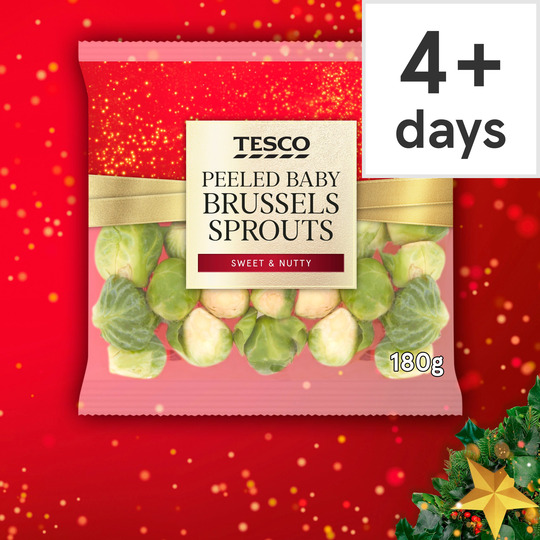 2%of the reference intake
Saturates
0.2g

1%of the reference intake
Sugars
2.5g

Hob
Instructions: 6-8 mins
Place in a pan of boiling water. Cover and bring back to the boil.
Reduce heat and simmer for 6-8 minutes or until tender.
Drain well before serving.

Hit and miss - often NOT peeled and caked in dirt.

Hit and miss. Sometimes they come as described (peeled, baby sprouts), other times they aren't peeled and are full of dirt - the grit working its way though several layers meaning the baby sprouts end up minute after adequate, labour intensive preparation.

The sprouts are not as advertised, not baby and not peeled. Not value for money at all.

The quality of this item seems to be getting worse. I'm having to remove almost half of each sprout, and they're already small, to get to a decent, usable appearance. They're invariably dirty and some are just unusable. I reckon half the packet goes into the bin.

The "peeled" brussels sprouts were not peeled. The

not for me thanks

would not buy these sprouts again, had boiled for 8 min, to hard, tried another 8 min, still hard, the taste also very harsh

Tasted better than they looked!

I had to trim off brown bits and some extra leaves although was within date. Tasted ok

Not baby sized or peeled, disappointing.

Being unable to work well with my hands I need produce which is ready to cook. These are not peeled, carefully or otherwise and there are 10-12 (not baby) sprouts in the bag. Very expensive and you still have to peel them Tesco need to check their product descriptions against their products. This fails.

I bought these to save time when preparing a roast lunch for a crowd. Unfortunately they were neither peeled nor baby.

Not as advertised - not baby and not peeled

As others have said, these are neither peeled nor "baby". I happen to have a bag of Tesco ordinary sprouts, which are SMALLER than these premium ones, and they need less peeling.

I like sprouts, but not these sprouts. They had an unpleasant taste.