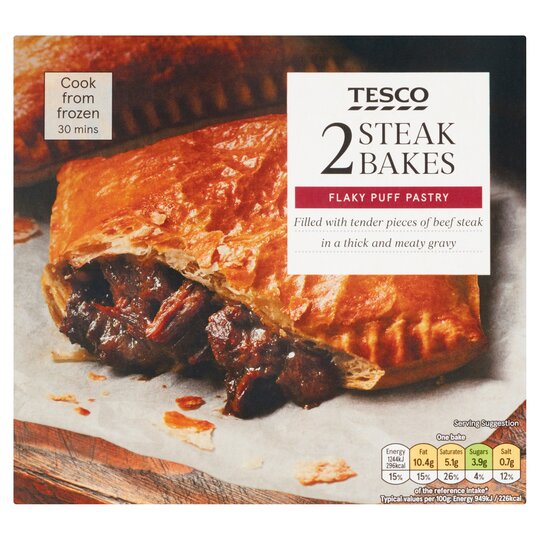 Keep frozen at -18C or cooler. Important: If food has thawed, do not refreeze.

Made using beef from the U.K. or Ireland.

Bought these a couple of times, but not again! Don't expect much for the price. Certainly not 'steak' as in the description much more like flakey small pieces. This time a white lump (about 1.5cm by 1cm) fell onto the plate which was either a part of brain or a mass of veins/arteries and when I took the pastry apart there were other holey white lumps amongst the gravy, so straight in the bin! Not recommended.

Cooked as per instruction but we couldn't cut the pastry, needed to use steak knives, there was one or two pieces of meat in each bake and mostly gravy. They tasted okay but we won't buy again as it took too much effort to cut the pastry, not sure why this was.

good quality and handy to save time

good quality and handy to save time

Pastry looks nothing like the packaging when cooked. When opening up pasty there was hardly any filling and maybe two or three pieces of tiny meat. Even for £1 I wouldnt bother buying again.

The last few I bought had no meat in them at all just gravy. I doubt I'll ever buy these again.

Bought these for my husband, but they were so awfu

Bought these for my husband, but they were so awful, we had to bin them and we very rarely bin food, as we hate waste, but these were inedible. Even following directions, the pastry would not cook, it came out with raw uncooked pastry and tasted of it too. To top it off, they are empty, very little filling, I've honestly never seen anything with such little filling! It was all pasty. Uncooked, raw pastry. Poor pastry at that. Waste of money. Waste of food.

Not like the photo 😢. Contained about 15% of the meat sauce you see here. Won't be buying again.

I don't know why these have got such poor reviews. Mine have always been full of beef and the gravy is really tasty. They taste very similar to the steak bakes from a certain well-know high street bakery chain. If you cook them properly in the oven, the pastry becomes nice and crisp and fluffy. They often stick to the pans in the oven, but that's probably my dodgy pans and is solved by a bit of oil on the bottom of the pan before baking them.