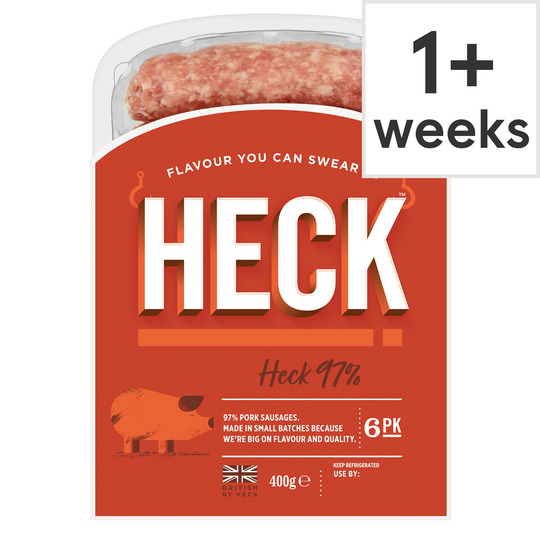 Keep refrigerated below 5°C. Suitable for home freezing. Freeze on day of purchase.Please use within one month. Defrost fully before cooking: do not refreeze once defrosted.

Cooking Instructions
Instructions: Remove all packaging before cooking. Cooking instructions are a guide only from chilled. Ensure piping hot throughout before serving.

Shockingly bad. They used to be very good but changes they've made to the recipe/ingredients leave them tasting like the cheapest you could find and with a very odd spongy texture.

What have they done to them!

Hecks sausages have been a favourite of ours for years. They are now completely different and the recipe appears to have been changed. They used to be really meaty in taste and texture but now taste like cheap quality sausages with a rather spongy rubbery texture. They are also in my opinion over salty. I notice it says 97% pork. I think it used to say 97 % pork shoulder. I wonder if they are cost cutting by using less desirable parts of the pig maybe of the mechanically recovered variety! Such a shame. Won't be buying again.

Top quality, meaty sausages! No rubbish in there, my kids won't eat anything else!!!

These were very tasty - more like a bratwurst than a traditional British pork sausage. I picked up in store as it was all that was available. Nice to have a different kind of gluten-free sausage.

These sausages are lovely and worth the extra price. They have far less fat than any other sausages I have tried and taste great.

Used to be nice - now disgusting!

These used to be very nice, when they used "97% pork shoulder" - BUT, they've changed the recipe (WHY do company's do this?) so that it's now "97% pork" - which means it can be almost ANY part of the pig - and they taste disgusting. I only managed to eat one and threw the rest away. I won't be buying them again while they're using this recipe.