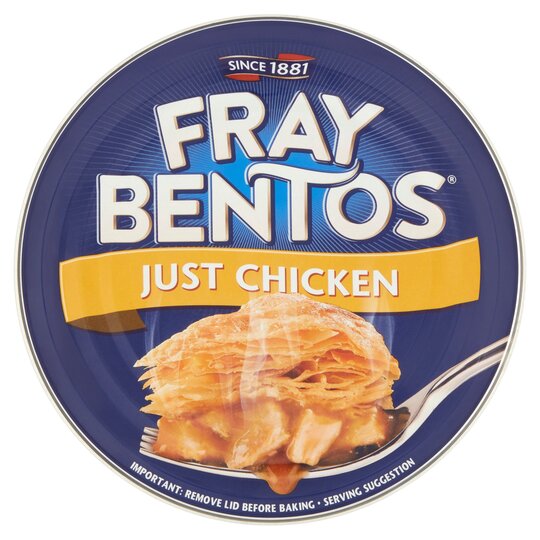 Store in a cool, dry place.Best Before End: See centre of can base.

CAUTION: Although every effort is made to remove all bones, some may remain.

Truly loved the pastry, when i delved inside, ther

Truly loved the pastry, when i delved inside, there wasn't much going on. Gravy OK, but Zero meat really, they are cheap, admittedly, but i guess if they filled them up with meat they would be double the price with whats going on at the moment. So 2 stars, if they put the price up by a quid and filled with meat, id most likely give 4 or 5. Come on Fray, lets get back to t old days!! Wiggle

People often joke about the quality if these pies, but having one at the back of the cupboard has saved my life on more than one occasion.

I used to work in a factory that printed the tins for these, anyway they changed the design and sent a rep to oversee the first print run.He brought with him a load of free samples to give to the workers but there were no takers! Even dogs wont eat them.

Had fond memories of these pies as a kid. Decided to try them out again. This thing is absolute slop. Sure, the pastry is just like I remember, but the filling is awful. I don't even know if you could call it chicken. It nearly just looked as if the chicken had deteriorated so badly that it had broken up into chicken particles. Would never buy this again, Fray Bentos need to sort their quality out. It might be cheap, but then again you could probably find more appetising dog food for cheaper.

Cooked properly and it's delicious. You can't say you don't know what you're getting, consistently yummy.

Absolutely terrible No chicken chunks, just tiny bits and slimy pastry underneath after cooking for the stated time. Will not be buying again.

When I first tried these 33% more meat Fray Bentos pies,I thought,I believe that when I see it; meat in a Fray Bentos pie,any meat.Not bad,keep it up,I thought. But they're up to their old tricks again.What's 33% of NOTHING.!

I shall miss the pastry though

I have been a regular purchaser of Fray Bentos tinned pies since the seventies, but there is one left in my cupboard and when that's gone, I don't plan on buying any more. For some considerable time, on the websites of at least four major supermarkets, these pies have been receiving damning reviews and, almost without exception, the lowest rating possible. Until a few months ago, I was stocking up with them whenever they were on half price offer, although if it wasn't for the lovely pastry topping, they wouldn't have made it onto my shopping list even then. The picture on the lid shows a slice of pie containing lots of nice looking chunks of meat, but I can't remember the last time I found that amount of meat in a whole pie, let alone a single slice! There are hardly any chunks at all, just a kind of meat slush. If the picture was an accurate representation of the meat content, I would buy these pies and happily pay the recommended price, but I think the chances of that becoming a reality are extremely slim, with the reviews being no better for the so-called new recipe pies, alleged to contain more meat! Hopefully a company that listens to consumers will take over the brand and do the necessary to produce the sort of quality Fray Bentos pies we were once guaranteed.

This was just like trying to eat a pie that contained a few pieces of tasteless wet paper in equally tasteless thin gravy. Utterly bland and horrible!

I hadn't eaten an FB pie for some time and bought

I hadn't eaten an FB pie for some time and bought on a whim. It still tasted o.k (a bit too sweet IMHO) but the quality of the meat content has taken a massive dive. Just a few shreds of 'pureed chicken like substance'. More like pastry and gravy, really. I won't be buying again i'm afraid.