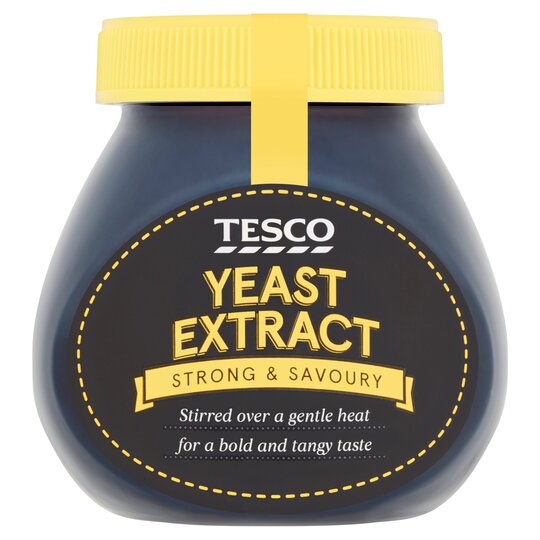 0%of the reference intake
Saturates
<0.1g

0%of the reference intake
Sugars
<0.1g

I ate Marmite 50 years ago when I was a boy. Never had it since. Decided to try it again and chose this Tesco version as a cheaper alternative. It tastes just the same as I remember. It adds a very interesting twist to food that would otherwise be bland. There's loads of things you can have it with - not just bread. I'm going to try smearing it over a jacket potato.

love this! it like half way between marmite and ve

love this! it like half way between marmite and vegemite

This is not good. I'm usually an advocate of own-brand products very often being comparable to the big brands with the savings on marketing being used on ingredients. Not in this case. It is much, much thinner than the branded version. I really don't think it is cheaper, it may be more expensive in the long run as this stuff is so thin and runny, it's also very slightly gritty. This drop in quality may be a recent phenomenon, who knows? But I won't buy it again.

After years of using the main competitor, I have now found the Tesco version (was a substitute) and to my pleasant surprise I prefer it. I prefer the texture as It spreads more easily on my rye breads and toast as mentioned by others and it tastes as delicious as the 'original'!. Top Marks Tesco!

Absolutely brilliant I just love it.On toast first thing in the morning,yummy.As good if not better then it's leading competiter. Mmmmmm just the best!!!!

Love this my kids were Marmite addicts when they were growing up. They still love marmite on toast as adults especially when i make it for them, a go to when they are not feeling well too. They have not noticed the difference so well done this is certainly easier to spread. The only thing is i still have to get marmite for their stocking fillers as it is tradition in our house even though they are all grown up. : )

Better than Marmite and Gluten Free!!

Easy to spread and really tasty! I use a spoonful of this to 'beef up' my vegetable gravy 👍

Good alternative if you have Coeliac.

As I have Coeliac I cannot eat Marmite but this one I can. Spreads more easily too. Would have preferred the "real thing" but this is an acceptable alternative.

Oh you have to try this it’s amazing

This is without the best marmite it’s amazing. You can spread it on your toast the original marmite is hard to spread but Tesco’s is so much easier, as I’m very arthritic it’s the best thing since sliced bread yummm thankyou claire

I can't really see the difference to Marmite in taste. It is runnier though... and that's great. Marmite was a bit like digging up a road a times. With the Tesco version I can just take a spoonful easily and not be dealing with the consequences 10 mins later. Bravo Tesco.