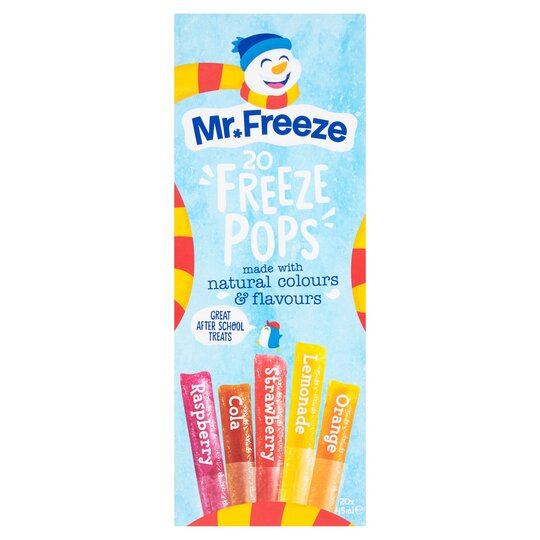 Store in a cool place away from direct sunlight.Best Before End: See side of pack.

Do not buy! Tastes Of Chemicals!!

If I could give '0' stars for my latest batch I would **Warning!!Strong Chemicals!!**. My son tasted the dark red one and he yelled, threw it on the floor and ran to the bathroom gagging. I tasted the ice pop and just like other reviewers had said it tasted dangerously of strong chemicals. Made us both feel sick with a thick coating on our throats. We gargled with milk and brushed our teeth to try and get rid of the taste. I rang Tesco immediately but they told me to take them back to the shop for investigation but they didn't seem surprised or worried at all. I advised them that they needed to remove them as a child could ingest the chemical and become sick & that it was a serious situation. They rung me back after speaking to my local store and again told me to take them to my local store ( during lockdown ). I tried to call the company that produce freezepops but just got an answer machine but will try again. I was shocked when I came to leave a review that so many others had already been affected by this contaminated product so Tesco obviously already knew of the problem when I spoke to them. So disappointed and quite frankly worried.

Avoid at all costs

If I could leave less than 1 star I would. After a few of these I had one that was incredibly off tasting and tasted strongly of chemicals like anti-freeze. My partner had no issue with hers so I assumed it was a one off, but the next one I tasted was even worse to the point it made me feel nauseous. It appears this is a well known issue with numerous reviews saying similar, so I cannot understand why these are still on sale?

Horrible chemical taste especially the purple and red ones. Definitely something not right with them & looking at the other reviews it clearly not a one off

Something wrong with these. Very strong chemical taste like bleach or antifreeze, not how they usually taste. Concerned there is a contaminated batch?

I would have given this 0. Poisonous chemical taste, my kids told me it tasted funny so I tried some. It was disgusting tasted like bleach, very worried that it was contaminated. 11 reviews saying the same thing and no action to remove from the shelves. I will be taking this up with Tesco directly.

One in three ice pops has a putrid, repulsive taste (mostly the red ones) ....what has gone on??!

Same as previous customers, have bought these for years and enjoyed them. Latest box contains ones with strong chemical taste and flavour, terrified they’ve been contaminated.

we used to love these, but recently we have to test each ice pop to see if its good. every other one tastes MOULDY!!!! Please can you remedy this so we give 5stars!!!

The last 2 packs of tiptops that i have purchased

The last 2 packs of tiptops that i have purchased from tesco have had a funny chemical taste in them , especially the red ones . Awful taste will not be buying these anymore !

Good quality untill recently where less than half of 5 boxes were edible. The other half has a really strong chemical smell and taste!