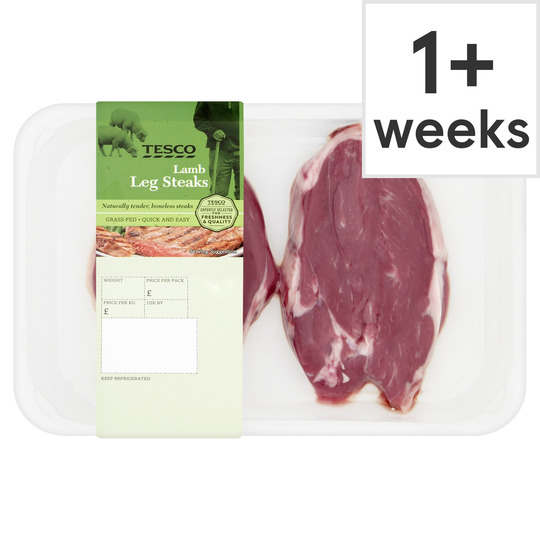 Suitable for home freezing. Ideally freeze as soon as possible after purchase but always by 'use by' date shown. Defrost thoroughly for a minimum of 12 hours in the fridge. Follow the preparation guidelines above. Once defrosted use on the same day and do not refreeze. Not suitable for cooking from frozen. Keep refrigerated. Once opened, consume within 24 hours (remove days) days and by 'use by' date shown.

Shallow Fry
Instructions: Pan fry High - Med. Lightly oil and season steaks on both sides. Heat a heavy based frying pan over a high heat until smoking. Add the steaks to the dry pan and cook for 1 minute each side, reduce to medium heat and continue to cook for a further 2 minutes each side (medium), or 4 minutes each side (well done). Remove from pan and rest on a warm place for 5 minutes before serving.

Not good quality, seemed to be puffed out with fluid and could not be described as steaks but as a slice. Shrank to a very poor show when grilled. Probably injected with something that is not declared on packaging. A leg steak from a butcher is quite different! Misleading advertising and hidden additives.

Terrible! Made the mistake of buying these twice o

Terrible! Made the mistake of buying these twice on two occasions and both times the meat was gristly and tough. Rejected three out of four bites.

can't understand some of the bad reviews I have bought these many times never had one problem , never found them tough Would highly recommend them. I never cook them for long, also add other ingredients with them

I found delicious and tender.

I cooked according to instructions but seasoned with dried rosemary, thyme, salt & pepper and added mushrooms to frying pan that picked up flavour of meat and seasoning - delicious.

OMGDNESS! Could not even cut with a serated steak

OMGDNESS! Could not even cut with a serated steak knife! Disgusting, do not buy!

DO NOT BUY THIS PRODUCT Waste of MONEY.

I was so disappointed with the state of these lamb steaks.. I had bigger rashers for breakfast than the very thinly sliced lamb chops. They looked nice until they were defrosted and then I was shocked at the size of them.The time I took the bone out of them there was nothing left to eat. It really was deceitful the way that they were package. Very unhappy person.. Pamela

Bought this twice in a row. Fatty the first time but bought again in case it was a one off...second time was even worse, no meat, just gristle! Absolutely disgusting...the dog was happy though!

I’ve bought these 3 times and they’ve always been excellent. I season and fry them for 5 minutes each side then I make a gravy with some mint sauce and cook them very slowly for an hour in the gravy. I am shielding at the moment so I’d like to thank the pickers who do my order as I’ve never had a pack which was all gristle and fat.

Dreadful. Tough, and full of gristle, I gave it to the dog ! I will stick to lamb chops from now on.

They looked at first glance nice leg steaks,while eating them we found lots of fat and gristle,won't buy them again