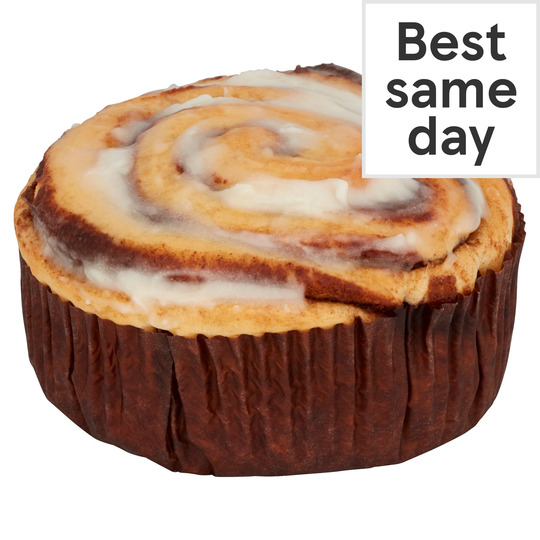 This is just the best cinnamon bun. Lovely and soft, not too gooey, the glaze is perfect, not too sweet. The taste of cinnamon is not overpowering. It’s overall a great flavour and texture without being stodgy or heavy. It’s perfect.well done Tesco. My favourite treat with the online shopping. Put the shopping away and sit down with one of these and a coffee. Perfect.

This was GROSS! It was raw in the centre and when I tried eating some of the outer it turned in to a thick dough like consitency in my mouth. There was very little cinnamon flavour either.

Love it but my local store don't stock it anymore

I love this bun and used to get one as a weekly treat at the weekend. Just the right amount of sweetness and cinnamon and the bun is lovely and doughy. Unfortunately my local store has stopped stocking these, along with the tear and share cinnamon bun, which I'm very disappointed about as I used to look forward to getting my cinnamon bun fix every week. I tried an alternative from another supermarket but it lacked the amount of cinnamon these buns have, and the icing didn't have enough cream cheese; they were a bit of a let down. If these were to be stocked again in my local store, I would definitely buy them. Come on Tesco, get your act together!

An absolute ray of sunshine. Soft and chewy as they should be (the imbeciles stating they are undercooked are uneducated and probably expect crisp overcooked Danish pastry like things from b and m or other such places), glazed with sweet but not overly cloyingly sweet with the perfect amount of cinnamon. I as someone else stated would also eat 10 a day. My only gripe is that for what they are they are slightly overpriced, I would also love one with raisins inside. Well done Tesco

Not very nice. Very doughy; as if not properly cooked. The icing was extremely runny. The bun had little flavour, and I found mine difficult to eat. My wife also had one, and managed just a small mouthful, and left the rest. We tried these for a change, but will certainly be avoiding them in future.

Very Very tasty. The best cake/bun I've had in years. Really good with your morning coffee or afternoon tea. The only downfall is that my local Tesco express no longer stocks them.

Used to be very tasty

These used to taste very nice, but suddenly they started to have different taste, like there is some extra spice in there which is ruining it.

The silver lining to the Covid19 cloud.

This “cinnamon bun” tasted as if a three year old was let loose in the kitchen with some plain flour and water. The supervising carer then indulged the child by putting it in the oven and decided to add a bit of icing sugar and ....oh yes , cinnamon. Absolutely horrible!!!