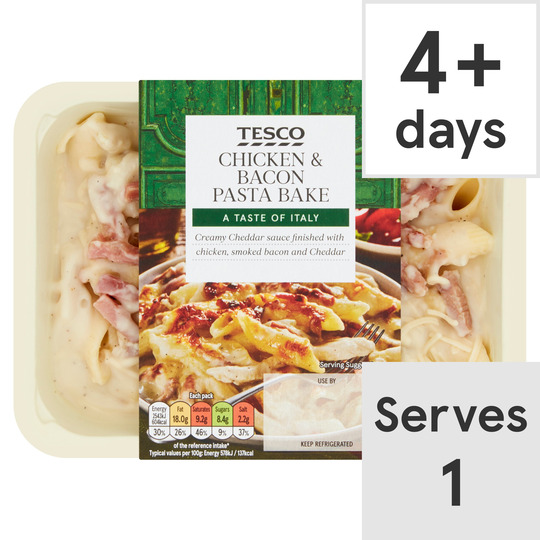 Instructions: 190°C/Fan 170°C/Gas 5 30-35 mins For best results oven heat. Remove film lid. Place on a baking tray in the centre of a pre-heated oven. Leave to stand for 1 minute after heating. Stir well before serving.

Instructions: 190°C/Fan 170°C/Gas 5 40-45 mins For best results oven heat. Remove film lid. Place on a baking tray in the centre of a pre-heated oven. Leave to stand for 1 minute after heating. Stir well before serving.

Made using chicken from Thailand and pork from the EU

I wish they hadn't changed the bacon in this. It u

I wish they hadn't changed the bacon in this. It used to be nice little rashers of proper bacon, now it's just processed inedible hard bits. Shame, as it used to be a nice dish.

The pieces of chicken were all the same size which immediately made me suspicious. I was right, a few were far too chewy and all of them tasted old and horrible. The bacon pieces were all hard little processed things...nothing like real bacon. The sauce had an odd flavour. The pasta was the best part. Taste of Italy? Italians would be insulted at this!

I think its super yummy. I prefer how the bacon wa

I think its super yummy. I prefer how the bacon was done in the old one but still nice :)

Well, I liked it!

Lots of reviewers didn't like this, but I did - perhaps because I had never tried the previous version, which was apparently nicer. It was a generous, tasty portion, with lots of good sized chunks of chicken. Reasonably priced too - I will be buying it again.

Online decription says " A Taste of Italy", but fa

Online decription says " A Taste of Italy", but fails to mention that it's made in Thailand.

Unfortunately all of the other reviews are right. I made the mistake of reading them whilst it was in the microwave. Most of it ended up in the “food waste” recycling.

The new recipe is awful.

New recipe is awful. Tastless sauce and the bacon isn't even bacon anymore. I won't be buying again.

Change the recipe back PLEASE.

Disgusting since the recipe has been changed. I use to buy this every week, but not anymore.

Revolting new recipe - bring back the old one!

The recipe has changed and is now absolutely disgusting. The sauce is tasteless and instead of proper bacon it now has tiny chewy bits of gristle. Made me feel sick whenever I accidentally crunched on one. Very disappointing - this used to be my favourite ready meal but won't buy it again unless the recipe changes back.