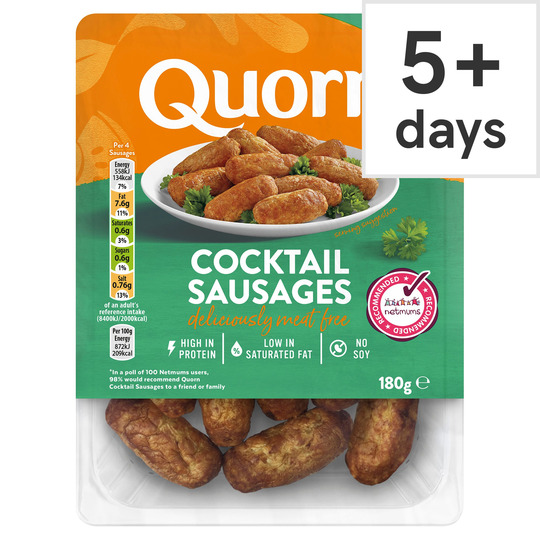 11%of the reference intake
Saturates
0.6g

3%of the reference intake
Sugars
0.6g

13%of the reference intake

of the reference intake*
Typical values per 100g: Energy 872kJ/209kcal

Keep refrigerated and use by the date shown on front of pack. Once opened, eat within 2 days.

There have been rare cases of allergic reactions to Quorn® products, which contain mycoprotein. Mycoprotein is made with a member of the fungi/mould family. Mycoprotein is high in protein and fibre which may cause intolerance in some people.

Dry but also quite fatty

I decided to try these as snack material for when I'm just a bit hungry. I used to buy the vegetarian chicken slices all the time but since they have been replaced by the vegan version I just cannot tolerate them so thought I'd try these instead. They're OK but dry but also very fatty. They're not as healthy as the slices were, being more than half again as much calories and more than four times the fat so I won't be buying again unfortunately. Bring back the vegetarian products rather than the slimy, tasteless vegan ones!

Like dried up toes! Absolutely vile. Our son who is a veggie wouldn't eat them and when I tried them, I could see why! Disgusting 🤢

Bought these as a snack to eat after doing my shopping. Popped them in the microwave to warm up, and they were delicious. I used to eat pork ones before becoming veggie, and these are the same texture but far better tasting. Highly recommended.

Not half as nice as before. The recipe has changed, less tasty, less salty. Not worth the money.

not as good as they used to be

not as good as they used to be. recipe change, not for the better.

I didn’t like them! Maybe I just had a bad batch as I kept finding hard/congealed lumps of whatever is inside the sausages. It really put me off so I decided to discard the rest of them which I wouldn’t normally do as I hate wasting anything but I just couldn’t eat anymore after that.

Better than the meat version. Make a great addition to a Sunday roast or Christmas Dinner. Who needs pigs in blankets!

Vegetarians and meat eaters were happy with these tasty treats!

Tasty snack to keep in the fridge, filling and low

Tasty snack to keep in the fridge, filling and low calorie.