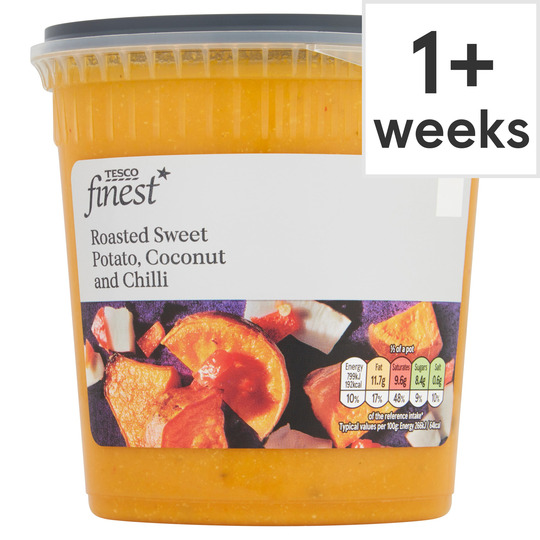 Cooking Instructions
Instructions: For best results microwave heat. To open, press down on the spout tab to break.
Caution
Take care when removing and pouring as product will be hot. When removing lid after heating hot steam may escape. This container may soften slightly but will regain strength on standing.
Important
Check food is piping hot throughout before serving.

Hob
Instructions: 5-6 mins. Empty contents into a saucepan. Heat gently, stirring occasionally, until piping hot. Do not allow to boil.

One of my favourite soups from Tesco. Thickens on

One of my favourite soups from Tesco. Thickens on heating and is very tasty. Good to warm you up at this time of year!

I'll eat iut again when sick. coconut-kinda there sweet potato-nothing chilli-nothing texturte is ok. If it were much cheaper I'd get it as it's easy to digest and has somethinckness. Bo trace of chilli, very little chilli and so on-as other reviews have said. Such a shame

Not a tesco finest!

I found this soup very watery with very little flavour.

I was tempted to buy this as it sounded delicious but it's watery and lacking in flavour compared to the other soups in the Finest range. I'll be sticking to the Pea & Wiltshire Cured Ham soup which I would fully recommend instead of this disappointment.

It was very watery, like this was the end of the saucepan and it had no spicy, in fact no flavour at all. Disatisfied

The flavour of the soup was lovely, but the textur

The flavour of the soup was lovely, but the texture was disgusting it was all separated and I couldn't eat it.

Very, very watery - smelled lovely but so thin in

I love the pea soup but not this one. Bought 2 and both were watery and had no substance. It was easier to drink through a straw.