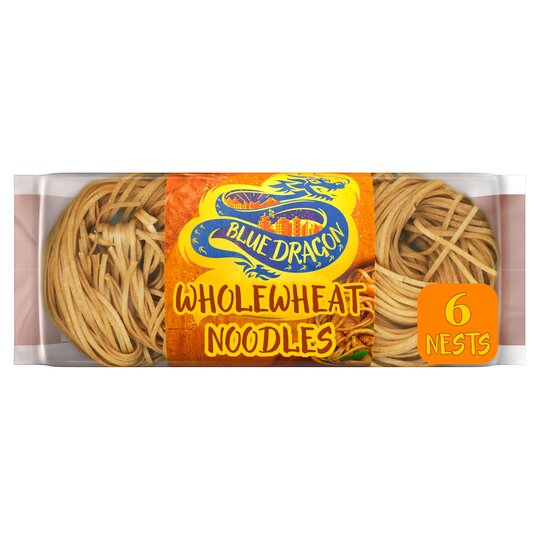 Store in a cool, dry place.Once opened, store in an airtight container.

Boil
Instructions: Bring a pan of water to the boil then remove from the heat, alternatively boil some water usign a kettle then pour into a pan.
Drop the noodle nests into the boiled water and soak for 5 minutes or if stir frying 4 minutes, stir frequently to separate noodles.
Drain and serve immediately or add to stir fry.

I love these noodles, they are delicious and go wi

I love these noodles, they are delicious and go with anything.

Was given these as a replacement for my usual Tesco whole wheat noodles and did not like them at all. They have a very strange taste to them and as soon as you attempt to separate them they break up into pieces despite following the cooking instructions. They fall apart even further when added to the wok. shall not be buying again.

Do Not Event Try

I binned a whole pack + I tried a pack and cooked to instructions, amended as the 'to instructions' was dreadful, and the 3rd attempt was just terrible, so pleased it was just us tha had the unpleasant task of eating them.

Bring back the old recipe!

As others have pointed out, the new recipe is horrible. They are too tightly packed to separate when cooked and when you try to force them apart they turn to a sticky mess. Yuck!

These are dreadful, they stick together in a stodgy mess which is impossible to separate and are quite tasteless. Will not buy again, despite wholewheat being healthier.

Bring back the old recipe

These were 5 star before they introduced their "New Improved Recipe". Now they are awful!!! The nests are so compressed and glued together they just dont separate during cooking so leaves you with chunks of uncooked noodles. If you try to separate them you end up with a mass of smashed up noodle pieces. I have attempted 3 times to deal with these noodles but failed every time. I wont be buying again. I'm really disappointed.

If you used to enjoy these before the first lockdo

If you used to enjoy these before the first lockdown, you'll understand why the price has dropped and they're now cheaper than the own brand version. The recipe has changed and they're now tasteless and don't separate properly when cooked, so you end up with a squishy, tasteless mass. I've persevered with them in the hope they'd return to the old recipe, but it's been a year now and they're still awful, so I'll be switching to the own brand.

It tastes awful. As soon as you cook it the noodles doesn't separate instead turns into a mushy chunk. Never going to buy it again.