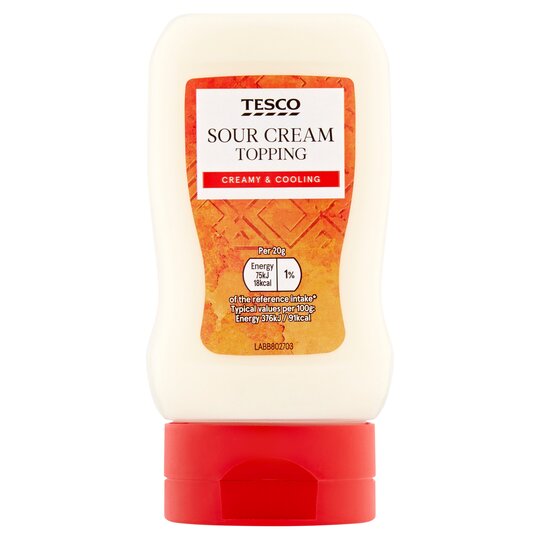 Store in a cool, dry place. Once opened, keep refrigerated and consume within 14 days. For best results serve chilled. Shake bottle before using.

No Relation to Sour Cream

I use sour cream in dressings, sauces and as it stands in fajitas. I received this as the real stuff wasn't available. It's awful. I tried adding to a cooked sauce and it just ruined it. If you use sour cream regularly, avoid this. If it were a blind taste test I would never guess it had any connection to sour cream.

Awful - bought to have with quesadillas and didn’t bother with it after the first bite. Has a kind of weird synthetic taste.

Bought this to use with chicken fajitas as they had none off the usual tubs in the chilled section beside salsa,garlic,homous etc ....have to say terrible wouldn't buy again so runny and sour🤣

I tend to buy this to go with nacho's and fajitas and it is a very tasty addition. However, as it very thick in consistency, it would be better to be a jar instead of a hard squeezy bottle. This would be to avoid cutting the bottle on half to scrape out the large amount of remnants behind.