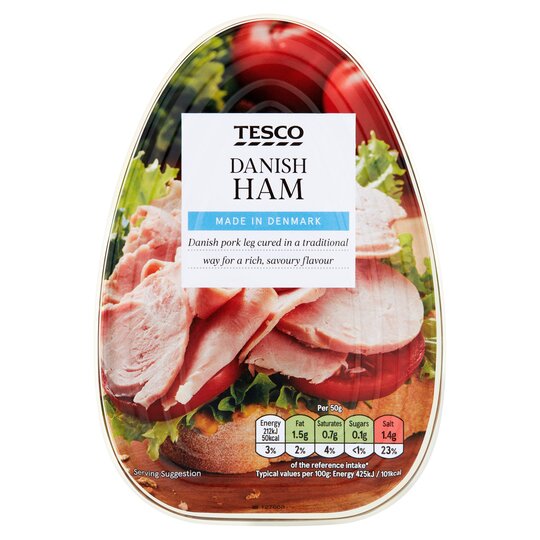 Store in a cool dry place. Once opened transfer unused contents into a non-metallic container, cover and refrigerate. Consume within 2 days.

Good for the cupboard.

Had not bought tined ham for years, but this is very good standby,now that is not easy to book a home delivery .I enjoyed the Ham!

Far too much salt. Could not taste ham

Had this for the first time today, normally buy Ye Olde Oak. Used to make a pasta bake with mushrooms and carbonara sauce. Really enjoyed it as did my husband who is not a pasta fan but this was very tasty. Would recommend a try.

Much better than the Branded so called Hams

Pretty good for a tinned ham, a lot more ham like than others I have tried.

Delicious piece of ham to be had occasionally.

Tasted very good for my liking at least, and I have eaten a ton of food to get to the size I am, so I do know a thing or two about food by now. I have to control myself as this is so tempting to eat too much in a day, as it contains a lot of salt, but otherwise I have nothing worth mentioning against this delicious piece of ham. It is worth a try for everyone at this price, and one can then make up one's own mind about it, but I can highly recommend it. Oh yes, this most likely has to be opened with a can opener, so do be careful as there is some liquid inside that could leak. Go ahead, and enjoy this as an occasional treat!

For a canned ham, it's pretty good

Once you open the tin & wipe that gooey stuff off it, the ham itself is ok. My husband had it on a sandwich & he thought it was delicious, but he also likes Spam. I would say it's just ok. In future I would use it if I was making something like a ham & cheese quiche. It would be quite handy to cut up in pieces. If your a fan of Spam this would be a real treat.

I have had princes ham before. It was not available. So, I tried the suggested alternative. I really wish I had'nt. Key broke off halfway through opening. When I finally managed to open it - a cascade of juice (not jelly, as with princes) fell out all over the place. I then tasted it. I really wish I had'nt. It was like rubber...so I threw the rest in the bin. If I could give no stars - I would!